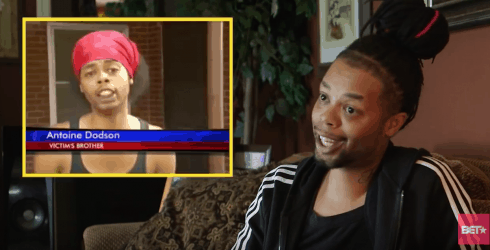 BET sat down with viral sensation Antoine Dodson, who became a beloved Internet meme thanks to his hilarious and dramatic local news interview. He’s now all grown up and is as amused at his Internet fame as the rest of us.

“Hide yo kids, hide yo wife, and hide yo husband cuz they rapin’ everybody out here,” he says his iconic lines with a knowing smirk. Dodson’s probably said this line on demand a million times since 2010.

One night eight years ago Dodson was staying at his sister’s house when an intruder broke in and tried to rape her. In the recent interview he says he had braids similar to the ones he sports now, but was going to have them redone the next day so his hair was in a bandana.

He says he heard his sister screaming in the middle of the night and found an intruder on top of his sister. He had a tussle with the guy in the hallway, and the intruder dodged Dodson.

When a news reporter came on the scene to report about the incident, Dodson was very vocal about what he witnessed. This T.V. interview did not deter the intruder, however, because the same thing happened to a different person soon afterwards.

Dodson was soon shocked to learn that his interview was racking up views on YouTube. Before he knew it, he had a million views. Someone even made his words into a song, and at first he wasn’t pleased because he thought they were making fun of him and his family.

He talked to the song’s creator and they offered to work with him on a full song they could sell on iTunes. He took them up on the offer and the song has since gone platinum. He even got to perform at the BET Awards.

Soon Dodson was romanced by the promise of Hollywood so he moved to L.A., where he was taken advantage of a public relations person who was getting paid for Dodson’s appearances.

He now has a kid and considers himself bisexual. He has his sub license and CLA license so he can be a part of the school system where his family lives. He’s grateful for his viral sensation because it helped him and his family get out of the dangerous neighborhood and lessen the chance of them “having to go through something that scary again.