Following in the footsteps of Radiohead’s “In Rainbows,” Play-Doh head filmmaker Michael Moore released his most recent “documentary” as a free online download on Tuesday. 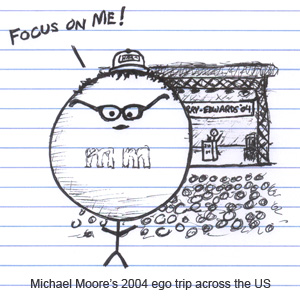 The title of the film is “Slacker Uprising” and it features footage of Michael Moore as he hops the country attending Democratic rallies prior to the 2004 election. The movie will most certainly rally thousands of independent voters in support of Barack Obama’s 2008 presidential campaign as they are confronted with the undeniable fact that celebrities love Michael Moore.

There has been some confusion about the title of the movie, not because “Slacker Uprising” is an over-intentionalized attempt to be hip and grassrooty, but because when Moore was in the process of making the film the rumored title was “How Michael Moore Single-Handedly Won the 2004 Presidential Election for John Kerry, Eliminating Pure Evil from the World and Probably Making Global Warming Go Away.” There is no word if that was the official working title, and if so, why it was changed. We think it might be because “Slacker Uprising” has more zing.

We should all applaud Michael Moore’s generosity in these troubled economic times. His selfless gesture puts extra money in the pockets of every hard working American that otherwise would have gladly shelled out $9 to see the movie in theaters. Wall Street analysts are anxious to see how this unexpected economic stimulus package affects the market in the coming weeks. Hopes are that the estimated $81 will be spent on real estate or U.S. made consumer goods.