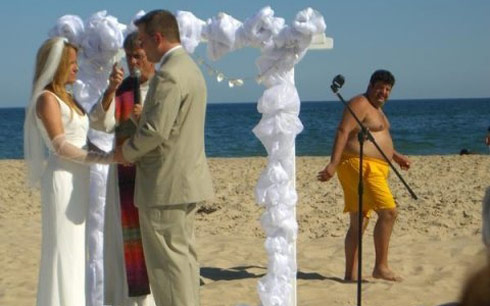 It’s time for a another public service announcement from your friends here at Starcasm. Florida, weddings, photobombs and knives do not mix!

A beach vendor was attacked by a wedding party, including the bride, when he came to pick up beach rental chairs and accidentally appeared in some of the wedding photos, according to an offense report from the Walton County Sheriff’s Office via NWFDN.

The chairs in question had been moved and stacked by the wedding planner and her crew. Witnesses told deputies that a verbal altercation ensued quickly followed by several members of the wedding party who approached the vendor and “began beating on him.” The bride was even said to have gotten in on the mix – ending up on the seaside sand herself.

At this point things went full-scale Florida as the vendor managed to free himself long enough to procure a filet knife from his truck as a means to defend himself. This move kept the ready to rumble wedding party at bay until the cops arrived.

The vendor told the authorities that he didn’t want to press any charges and that he just wanted to be left alone. Witnesses told the cops that he did not approach or threaten anyone in the wedding party with his knife.

No charges were filed.