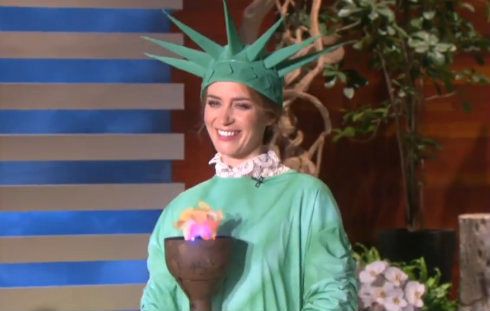 New American citizen Emily Blunt is getting a good ol’ fashioned “Welcome to the USA” by getting lampooned by Fox News.

While promoting her upcoming film, the actress has spoken several times about how she just became an American citizen — which gives her dual citizenship stateside and in the U.K. She just doesn’t seem particularly thrilled about it all…

“I became an American citizen recently, and that night, we watched the Republican debate, and I thought, ‘This was a terrible mistake. What have I done?” she recently told The Hollywood Reporter.

Speaking to Jimmy Kimmel again about it last week, Emily said, “I’m not sure I’m entirely thrilled about it. People ask me about the whole day. They were like, ‘Oh, it must have been so emotional.’ I was like, ‘It wasn’t! It was sad!’ I like being British.”

Of course, Emily wouldn’t have gone through all of the steps of becoming a citizen if she didn’t actually want to do it…but that still isn’t protecting her from backlash, especially from those at Fox News.

During Fox & Friends yesterday, Anna Kooiman had this message for Emily: “Why don’t you leave Hollywood, California, and let some American women take on the roles that you’re getting, because Americans are watching your movies and lining your pockets.”

Co-host Steve Doocy agreed, adding, “You know what Emily Blunt just did? She just Dixie Chicked herself. She has alienated half the country, that now will think twice about going to one of her movies.”

And those at Fox News aren’t alone in criticizing The Devil Wears Prada actress. In a highly “favorited” tweet, Dean Cain said, “Funny, I don’t remember America asking #EmilyBlunt to become a citizen.”