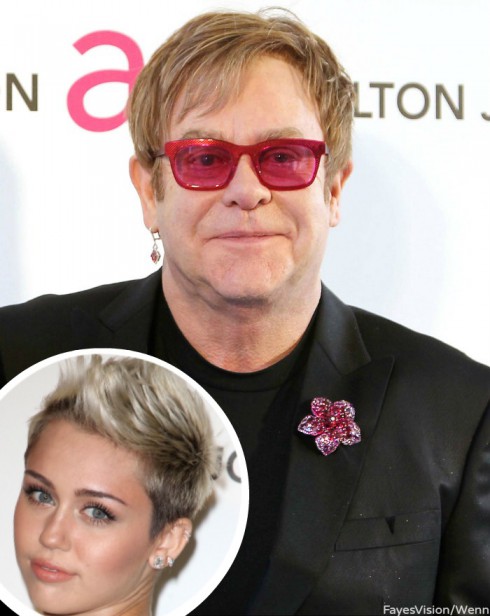 Throughout his 46 years in the entertainment industry, Sir Elton John has seen many stars rise and fall. And, after watching history repeat itself so many times, the music legend said he’s learned how to “spot a car crash before it happens.”

These days, Elton told The Australian he’s most concerned about Miley Cyrus.

“I look at Miley Cyrus and I see a meltdown waiting to happen,” he said this week. “And she’s so young!”

“He’d been doing drugs for so long, he’d been a mess for so long –- and I’ve known Michael since he was 12 or 13 –- that it was never going to happen,” Elton said of Michael’s inability to get clean.

He added that Miley is similarly enabled because she is so successful: “She’s got two records in the top 20, so who is going to stop her?”

The singer said he is also concerned for Lady Gaga, who is the godmother of his young children.

“I’d like to be able to talk to her right now, but I can’t get through to her,” he said of Lady Gaga. “And there are times when you have to listen. When your persona begins to take over your music and becomes more important, you enter a dangerous place. Once you have people around you who don’t question you, you’re in a dangerous place.”

This certainly isn’t the first time Elton’s expressed concern for young stars and the people who enable them. In fact, Elton’s best-selling record, Candle in the Wind, is all about the dangerous consequences of fame…