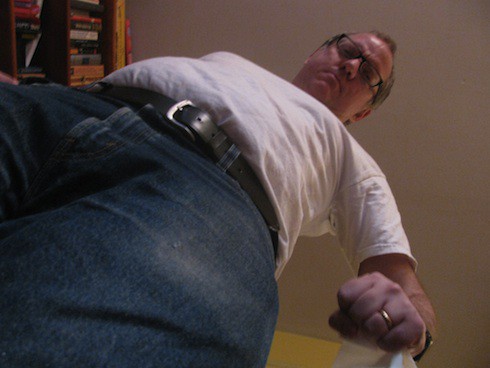 Over the past week, the “dad bod” has become a thing. The discussion went viral after Clemson University sophomore Mackenzie Pearson published an essay on dad bods at college-oriented website The Odyssey. The essay is half-primer on the idea of a “dad bod,” and half paean in praise of it. Much like the alleged body type itself, the exact definition of the term is a bit loose, but this ought to give you a general understanding:

The dad bod is a nice balance between a beer gut and working out. The dad bod says, “I go to the gym occasionally, but I also drink heavily on the weekends and enjoy eating eight slices of pizza at a time.” It’s not an overweight guy, but it isn’t one with washboard abs, either….While we all love a sculpted guy, there is just something about the dad bod that makes boys seem more human, natural, and attractive.

Though she didn’t create the term, Pearson has become something of its champion, and she elaborated upon the term in an interview with Slate. “He’s probably that guy who played football in high school and came to college and didn’t play football,” Pearson said. “It’s a boy-next-door look. He’s the kind of person you go on a hike with, and then at the end of the day, you eat pasta and lay in bed and watch a movie.”

So, who has a dad bod? Anyone you might recognize? Pearson lists Chris Pratt (before he got into shape for Guardians of the Galaxy), Jason Segal, and John Meyer. And Jon Hamm, Mr. Don Draper himself, who might have the quintessential dad bod.

While some men say the notion of a dad bod has helped with their own insecurities, some observers are crying foul. Brian Moylan, writing for TIME magazine, says that the problem with the dad bod is it

continues to reinforce inequality about what is acceptable for men and women. While the ladies have to go to Pilates and watch every single calorie, guys are free to let themselves get lazy, chow down on all the chips and guac they want, and still expect their prospective mates to be fit.

And a recent ABC piece on the phenomenon points out that there is no female equivalent for the “dad bod.” The hashtag #mombod met a lukewarm reception on Twitter and fizzled out. One prominent blogger cited in the ABC piece points out the double standard:

Mom bod is something you need to get rid of as soon as having a baby because if there is any evidence on your body that you have had a baby it’s a problem. A mom bod doesn’t have six-pack abs. A mom bod has softness it to. It has been through the wringer a bit. Probably tired.

The piece also points out the mixed reception lingerie model Sarah Stage received when she posted photos of her six-pack abs during the ninth month of her pregnancy to the internet.

So, is the “dad bod” an unfair double standard? A new name for something that has been around for forever? Do you, or someone you know, have a dad bod? Do you like it? Do you…love it?