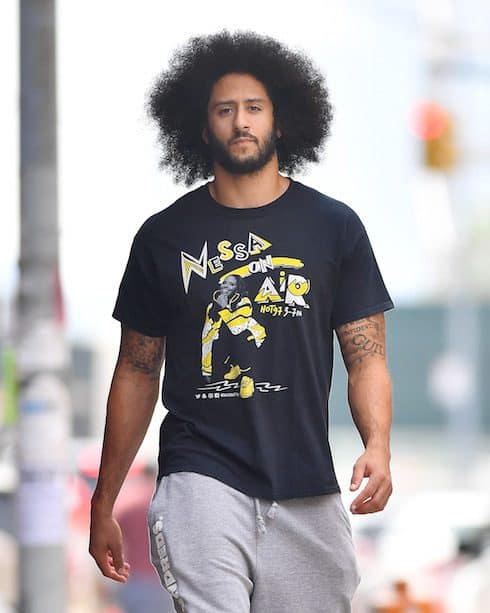 CELEBITCHY – Colin Kaepernick’s #JustDoIt campaign for Nike appears to be going well for both parties, though six or ten people are burning their Air Jordans in protest of the still-controversial figure. Meanwhile, it turns out Kaepernick has had a contract with Nike since 2011, and has presumably been getting paid endorsement dollars by the company even though no NFL team will sign him

VOX – According to legendary journalist Bob Woodward’s new book Fear, even Donald Trump’s closest advisors say he has the mental capacity of “a fifth- or sixth-grader,” ignore some of his direct orders, and swipe documents off his desk before he can sign them because they feel they’ve “got to protect the country”

THE BLEMISH – A Kindergarten in China hired a pole dancer to do a pole dance at the school on the first day of the school year to…kick off the year with a bang, somehow? And yes there is video

LAINEY GOSSIP – Melissa McCarthy is getting a great deal of early Oscar buzz for playing a lonely con artist in the film Can You Ever Forgive Me?, which film is also getting a ton of praise on the festival circuit

THE BLAST – Gloria Govan’s ex-husband Matt Barnes is asking a judge to give him full custody of their two children in light of her arrest for felony child endangerment last week. Wednesday morning legal showdown expected

THE ASHLEY’S REALITY ROUNDUP – The Challenge star CT Tamburello is getting married to his baby mama Lilianet Solares this weekend, congrats! Here’s an exclusive preview of their wedding, which is being filmed for a forthcoming MTV special

JEZEBEL – Jerry O’Connell’s new Bravo talk show, which was originally called Real Men Watch Bravo until a bunch of people pointed out all the reasons why that is a dumb name, is now called Bravo’s Play by Play and has a trailer

DLISTED – Congrats also to Claire Danes and her husband Hugh Dancy, who just announced that they welcomed their second child on August 21st. The couple has yet to reveal their child’s name, but are (rightly) getting teased in advance as their first child, Cyrus Michael Christopher, has the rare trifecta of three first names

REALITY TEA – The Real Housewives of Dallas star D’Andra Simmons continues to bask in multiple cast controversies: A day after she tried to apologize for suggesting Brandi Redmond abuses Adderall, she’s now being called a liar and all manner of other things by upcoming former friend LeeAnne Locken

LINKS All The Bachelor finalists ever, lesbian Xena, new most-followed person on Instagram…