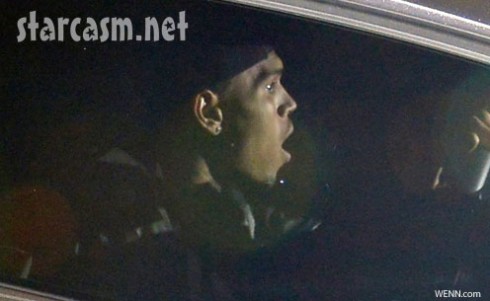 Chris Brown crashed his Porsche into a wall last night on his way to a charity event, and he blames the paparazzi.

His luxury car was completely totaled after his rep says he was cut off by two vehicles then, “the occupants jumped out, with cameras, and aggressively approached his vehicle.” He then reportedly turned down an alley, and hit a wall when two more cars trapped him.

The Beverly Hills Police Department’s statement says Chris was involved in “a solo, non-injury traffic collision” and that he “collided with a wall.” The statement continued, “Brown stated that he was being chased by paparazzi causing him to lose control of his vehicle. Brown’s Black Porsche was towed from the scene at his request.”

Tonight Chris is set to attend the Grammy Awards, four years after his fateful Grammy Awards attendance that ended with Chris assaulting his then-girlfriend (and now girlfriend) Rihanna. Although it’s not known for certain, there are rumors and speculation that they will show up together at the high-profile event.

Rihanna talked to Rolling Stone about letting Chris back into her life after their tumultuous history together:

“I decided it was more important for me to be happy,” she said. “I wasn’t going to let anybody’s opinion get in the way of that. Even if it’s a mistake, it’s my mistake. After being tormented for so many years, being angry and dark, I’d rather just live my truth and take the backlash. I can handle it.”

It’s been a pretty crazy week for Chris, who appeared in court this week because the DA was accusing him about lying about completing community service as part of his probation requirement from the assault charges against Rihanna.

“The motion is a disgrace, and the D.A. should be embarrassed, and I plan on asking for sanctions against the D.A. I also encourage the Richmond Police Department to take legal action against the L.A. district attorney.”