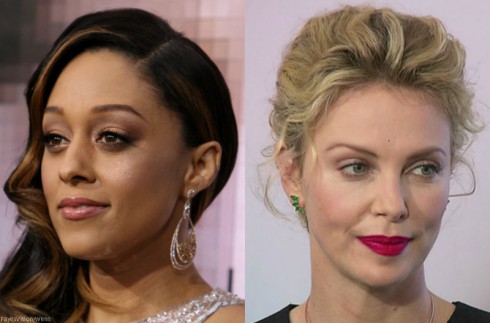 Charlize Theron and Tia Mowry are in a major feud over SoulCyle, supposedly. It all started a few weeks ago when Tia told InTouch that the Oscar winning actress wasn’t very nice to her outside of a SoulCyle class.

Then PageSix had sources saying Charlize tried to get Tia banned from SoulCyle (a stationary bike joint) for throwing shade at her in the tabloids. “Charlize came in so pissed off after Tia went to the tabloids about her, and she demanded we bar Tia from ever coming back. When the manager refused, Charlize just got angrier and said she’d go to the top to make it happen,” an insider told them. They even claim Charlize said, “This nobody who was famous for a minute 20 years ago can complain to the tabloids about me but I can’t expect you to protect me from hangers-on in your studio?

Tia herself is saying the whole thing had gotten out of hand. “I do not know her,” she told E! at the L.A. premiere of Teenage Mutant Ninja Turtles. “I do not know Charlize. I absolutely love her, she’s my ‘woman crush Wednesday,’ you can even see it on my Instagram! I’m obsessed with her, I love her, it was definitely blown out of proportion. So that’s all I’m going to say about that.”

LHHATL’s K. Michelle and Perez Hilton get into epic feud on Twitter