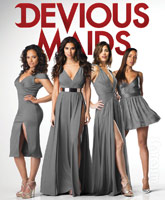 It has been almost nine months since the dramatic cliffhanger conclusion of the second season of Lifetime's soapy opera Devious Maids, which featured a spray of bullets after Rosie and Spence's wedding and a dropped bloody bouquet of flowers. Last week Lifetime announced that the show's third season will premiere on Monday, June 1 at 10/9c and they also included some tidbits on what to expect this season, including the addition of Glee's Naya Rivera to the cast! Also, check out all the latest theories on who got shot at the wedding! (MILD SPOILERS)
Read More...
Read More...
Read More...
Read More...