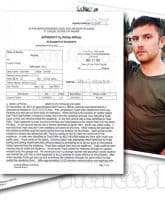 Sarah Palin's oldest son Track Palin has been arrested for domestic violence for the second time in two years after he allegedly broke into his parents' home and assaulted his father, Todd Palin, who had locked the door and pulled a gun on his son. Track disarmed his father before taking him to the ground and punching him in the head, causing numerous cuts and bleeding. Keep reading for the full report from the arresting officer.
Read More...
Read More...