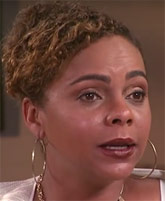 Former Saved By the Bell star Lark Voorhies finds herself in the news for all the wrong reasons as the fallout from her split with former gang member Jimmy Green worsens. She says she was hacked after an epic rant about Green's average sized, smelling like corn chips manhood, was posted to her Instagram account. He followed that up by saying he has a sex tape that "shows everything." See the Instagram post, get Green's crazy comments about the tape, find out about Lark's mom filing a restraining order against Green and see a bizarre interview in which Voorhies addresses her mom's claim that she was diagnosed with bipolar disorder.
Read More...
Read More...
We use cookies to ensure that we give you the best experience on our website. If you continue to use this site we will assume that you are happy with it.OkNoPrivacy policy