And in this corner, wearing the short sleeve shirt and biiiiiiiiiiig smile – he currently calls Illinois home – the Democratic nominee for president of the United States! 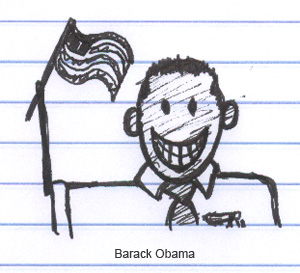 He pontificates
He wins debates
He aspires to be the first African American President of the United States.

He’s got less experience than the Jonas Brothers.

As far as his time in the senate floor, Britney Spears has kept panties on for longer periods of time.

He’s the thin as a rail, skin ain’t pale, never static, charismatic yahoo from Oahu, the 2008 Democratic Party candidate for the President of the Untied States, Barack Obama!