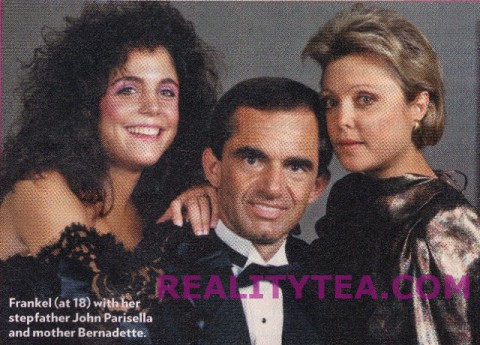 Now her mother, who has been amazingly silent since her daughter found fame several years ago, is speaking out. Briefly. In a short piece published in this week’s Star Magazine Bernadette claims she is shocked by her daughter’s representation of her childhood, though she does admit that Bethenny witness “fights” between herself and Bethenny’s step-father John Parisella. She does admit being physically abused by Bethenny’s father Bobby Frankel, but says she took Bethenny away from that situation at age two.

“I’m not going to say that Bethenny had the perfect childhood. I had loved Bobby but he hit me, so I left him and took Bethenny back to New York when she was almost 2 years old.”

Bethenny has described destructive fights between Bernadette and second husband John Parisella, saying her mother would destroy furniture and vases to get his attention.

Bernadette’s side: “We would have screaming matches . . . Bethenny did witness. The police did come around a few times, but they always left without incident.”

She also refutes Bethenny’s insinuation that she was a bulimic alcoholic by claiming that she could not have held down a career as an interior design professor if this were the case.

Bernadette also trashed her daughter during her run on Dancing With the Stars this winter, claiming that Bethenny knew how to skate because of extensive training as a child, and was probably throwing her performance.

This interview still doesn’t do much to bring the public over to Bethenny’s mom’s side. She admits being in an abusive relationship with Bethenny’s step-dad. Her denials of eating disorders and alcoholism, just like Bethenny’s claims, can’t be proven, but it’s hard to imagine that Bethenny Frankel is malicious enough to make up this whole sad back-story and keep repeating it again and again on television and the press.

UPDATE: If you doubt Bethenny’s side of things, I recommend you read her auto-biography/self-help book A Place of Yes, where she honestly and eloquent explains her perception of her childhood experience with her mother, her father, and her step-father. Click here to order from Amazon.

Bernadette has responded to Bethenny’s book with this statement: “My comment is the same as it was — I consider her to be demented and beyond help. Reconciliation is not up to her at all. She would never want to repair anything because then all of her lies would come out.”

Why did Johnny Wier hate Bethenny Frankel on Skating With the Stars?