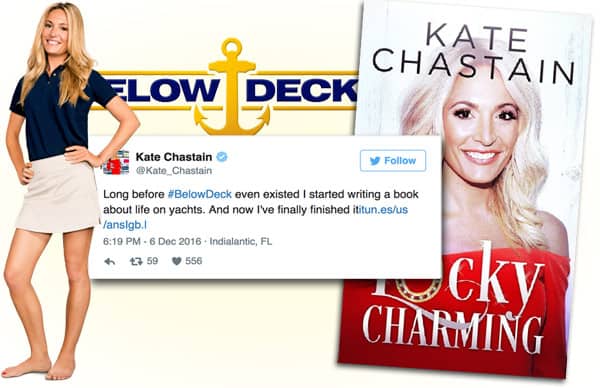 Fans of Below Deck got an unexpected Christmas gift from chief stew Kate Chastain as she surprised everyone by releasing her book Lucky Charming this week!

Kate has hinted at working on a book for some time, but the first indication that the book was a done deal and coming out soon was this tweet from Kate last week:

Long before #BelowDeck even existed I started writing a book about life on yachts. And now I've finally finished ithttps://t.co/rMOvMNYngR

The book is now out in ebook form via iTunes and Amazon with the hardcover print edition scheduled to hit shelves next week. Kate also revealed that she has been approached to record an audio book version as well

I have been contacted by Brilliance Audio for an audio option but haven't recorded yet. #BelowDeck https://t.co/IQlLKPklNH

I can't wait to record the audio version! There are defintely some parts where my tone will be useful https://t.co/JOuVF0CV1k

So what exactly does Kate’s book cover? For those looking for behind-the-scenes gossip on the stars of Below Deck, you will be disappointed. But, for those of you wanting to learn more about how Kate got into the yacht life — told with Kate’s usual sense of humor and candor — then Lucky Charming is exactly what you’re looking for!

The book picks up as a self-admittedly spoiled and pampered young Kate prepares to graduate from college and join the real world with a real job and real responsibilities. In the first chapter she talks about when she first thought about yachting as a great transition from wealthy partying college student to fully functioning adult:

I considered that one year of working on yachts might be like a finishing school for me. I was excited (and nervous) to put myself in an adverse situation to see what I might evolve into. I would travel the ocean depths, searching for a deeper life, in a world of rules and discipline that I could hardly fathom. I would learn the much-needed housekeeping skills I had never had to hone all while seeing amazing places, and then one year later, I would come back home with a bank account full of money, allowing me to ease into adult life on my own terms. Working on yachts probably wouldn’t be the easiest thing I’d ever done, but in the end, I would be a better person for it.

In true Kate fashion, she later received a series of signs that yachting life was the right thing for her courtesy of an ex-boyfriend, Sex and the City‘s Carrie Bradshaw, and the blinged-out MySpace profile of Julie Perry, the author of Kate’s sooon-to-be life bible: The Insider’s Guide To Becoming A Yacht Stewardess.

Kate went against every fiber of her flamboyant fashion-loving being and purchased a plain white polo shirt with a pair of khaki shorts from The Gap before packing her suitcase in preparation for heading down to Fort Lauderdale after college graduation.

After walking the stage and getting her diploma, born again brunette Kate sold her Jeep and followed through on her plans. Before long, she found her first stewardess job aboard the Dolce Far Niente, a former tugboat whose name is Italian for “the sweetness of doing nothing.” From there, things get wet and wild as Kate makes a huge splash by doing a cannonball into the deep end of yachting life complete with boats, boys, booze, buoys and — let’s not forget — hard work. 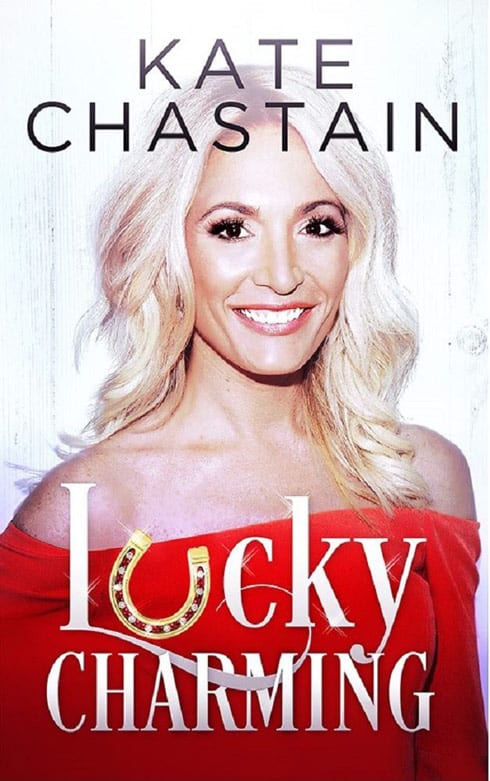 Here’s the official blurb from the publisher:

Blissfully shallow and carefree, Kate Chastain was your typical twenty something college co-ed. Well, until reality gave her a wake-up call in the form of a diploma, that is. At a crossroads after graduation, a serendipitous coincidence convinced Kate to abandon life as she knew it and jump feet first into the world of working on mega yachts. At first, she stumbled her way through life as a stewardess, just trying to adjust to her new surroundings and clumsily ‘learning the ropes’ via trial and error. Like shit-tons of error. But now, nearly ten years and a hit reality show later, Kate is finally ready to share the good, the bad, and the downright shocking details about her life at sea with the world’s most rich and famous.

It was 2008 and we were anchored off of St.Tropez. I had only been a yachtie for two seasons at the time when I turned to the Captain’s wife, and said, “You know, I could write a book about all of insane things we see working on these boats…..the sex, the money, the celebrities….”

My older, more experienced coworker rolled her eyes and laughed then was quick to dismiss my silly idea, “Kate, of course we could all write a book about what we see on yachts. We’ve all said it for years…..but, if you actually did that, you would never get hired on another yacht again.”

She went back to polishing the crystal wine glass in her hand and I was confused for a second. “But Stacie, if so many people knew about the book that I couldn’t get a yacht job, would I still really need one?”

Still unsure if you want to commit to buying Lucky Charming? Then head over to Amazon where you can check out a free preview of the first 42 pages! I can pretty much guarantee you won’t be disappointed — I know I wasn’t! The book is very well written and Kate’s personality shines through on every page.

So, what are you waiting for? Below Deck the halls now and get Lucky Charming as a Christmas gift for yourself or that Bravoholic on your shopping list! It’s only $5.99 for Kate’s sake!