Ray J made headlines Friday when he announced that he would be releasing a new single titled “I Hit It First” in which he sings about the fact that he put his penis inside of Kim Kardashian’s vagina before Kanye West. (Im not sure how else to say it — Ray J’s brashness has all but eliminated the option for subtlety here.)

It’s only fitting that the new song has now gotten the same treatment as Ray J’s infamous sex tape with Kim Kardashian by being “leaked” online. So, in keeping with the no-nonsense Ray J approach, I won’t beat around the Reggie Bush here…

And the “I Hit It First” complete lyrics:

[Verse 1: Ray J]
I had her head going north and her ass going south
But now baby chose to go West
We deep in the building she know that I kill ’em
I know that I hit it the best
Candles lit with that wine, money still on my mind
And I gave her that really bomb sex
No matter where she goes or who she knows
She still belongs in my bed
Going hard in the streets, mobbin with my homies
Sippin’ on good, blowin’ on OG
Me and ghost sittin’ clean with the matching rollie
I did that first so everybody know me 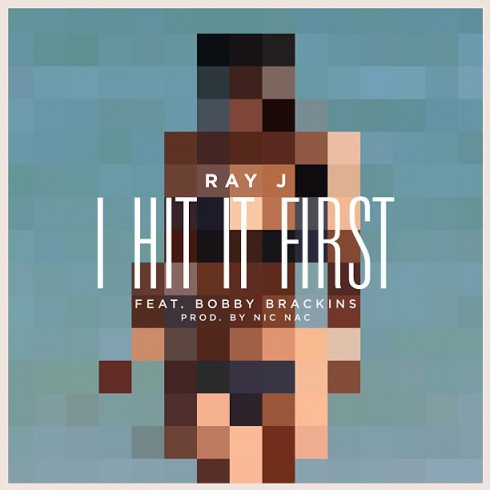 [Verse 2: Bobby Brackins]
Steady on at the top where we finna be
Apple juice and we mix it with the Hennessy
Give her no dough to come, but I gave her 10 to leave
I bet I hit it first, unless you took that girl virginity
First come, first served is all a player know
But I don’t wanna be a player no more
That’s a lie, I’m way too fly
I love anything with ass that walk by
Yeah you love her, yeah you hug her and you kiss her
She dome me up, she give me face like some whiskers
Tia’s and Tamera’s, I be knockin sisters
And I still hit, while you lonely and you miss her

[Bridge: Ray J]
When I walk in the function
You already know I’m leaving with something
Girls know when I’m coming
I give a girl real proper loving

Anyone else thinking this may start a whole new gener of “Brag Rap?” (Insert Chris Brown joke with Ray J song title here.)