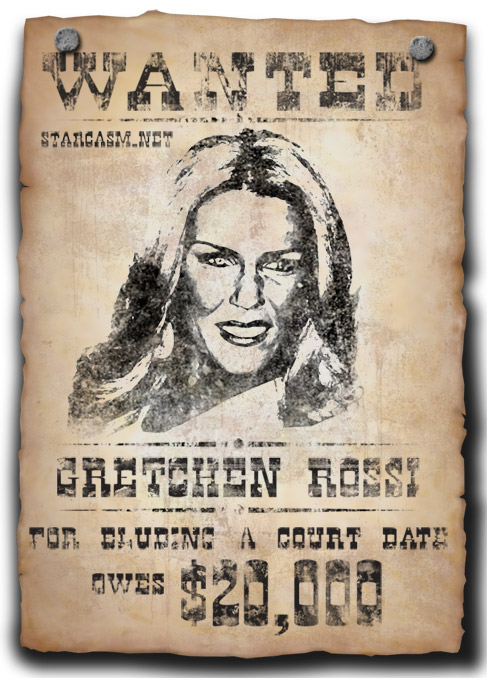 Earlier today an Orange County Superior Court judge issued a warrant for the arrest of Real Housewives of Orange County‘s Gretchen Rossi after the controversial reality starlet failed to appear for a court hearing stemming from a lawsuit filed by Gretchen’s ex-boyfriend Jay Photoglou.

But, before things escalated into a high speed chase involving multiple police cars and a hot blond on a Harley Davidson, the judge had second thoughts and said he would hold onto the warrant for one more week, allowing Gretchen one last chance before she and Slade Smiley become Bravo’s new reality show Bonnie and Slade.

The suit was filed by Photoglou in January after Rossi claimed he threatened to kill her, Slade and her dog when she attempted to take out a restraining order against him. Photoglou claims Gretchen defamed him and lied about their relationship on television, to the media and on her blog. But that’s not all! According to The Orange County Register:

In addition to libel and slander, the suit alleges instances of invasion of privacy/false light; intentional interference with prospective economic advantage; negligent interference with prospective economic advantage; intentional infliction of emotional distress; and conversion (taking property from another).

You might remember the Real Housewives of Orange County Season 4 Reunion Special during which Tamra brought up the fact that Gretchen had been dating Photoglou at the same time she was engaged to the very wealthy and older Jeff Beitzel, who had been diagnosed with terminal leukemia. The revelation sparked a feud between the couple that still hasn’t been settled, and probably won’t be settled before next Thursday’s court date.

As part of the suit, Rossi had to submit to what’s called a “judgment debtor examination” so the other side could determine how much money she makes, a standard procedure on Photoglou’s part after a judge ordered her to fork over $20,000 in legal fees to him when her injunction was rejected last May.

“She is just making Jay jump through hoops to get his money he deserves,” the plaintiff’s attorney, Orlando Castaño, tells E! News. “We know she has the money. She’s just drawing this out.”

While Rossi was MIA, a legal eagle showed up on her behalf and asked for a continuance which the judge denied. Instead, His Honor demanded that the blond-haired, blue-eyed beauty appear in person next Thursday to either pony up the dough she owes Photoglou or to sit through the debtor exam, which would allow Photoglou’s lawyer to comb through her finances and ask questions about her earnings.

“She can do two things. She can come with a cashiers check and pay it. And if she doesn’t pay, then we get to see everything,” added Castaño.

Gretchen is the second Orange County Housewife to earn an official starcasm.net wanted poster after Lynne Curtin’s financial troubles late last year – how soon before we can make it three? My prediction is that I’ll be making one for Slade by the end of the year! Stay tuned!