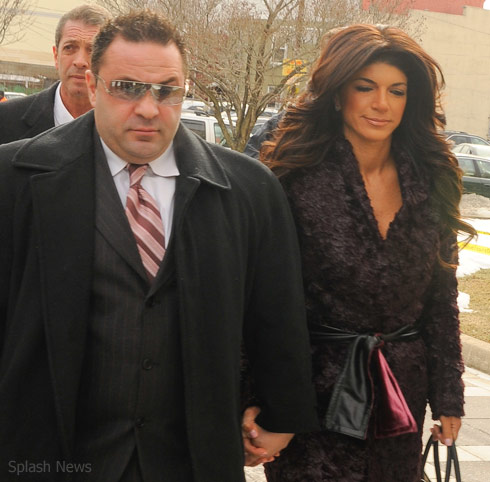 Teresa and Joe Guidice were supposed to be sentenced for federal fraud charges July 8, but their sentencing has been postponed to September 23 because of the sudden death of Joe’s father. Teresa may be able to avoid prison, but it is inevitable that Joe will get some prison time, and he could also possibly get deported after he serves his sentence.

Their lawyer thinks there’s a possibility that Teresa won’t get any jail time, and if she does, it will be staggered against Joe’s so someone will be home to take care of their four daughters.

“Because of substantial hardship with the kids, we are hoping staggering of sentences does occur,” attorney Miles Feinstein said to US Weekly after the couple pled guilty to nine counts of mail, wire, bank and bankruptcy fraud this March. “I’ve had it in a few cases where both parents are sentenced to jail time but we stagger the time so both parents are not away from their kids at once.”

There is a possibility that Teresa could get probation or house arrest instead of actually going to prison. Joe could get deported after he finished prison time because even though he was moved here from Italy when he was a baby, and his parents and brothers are citizens, he never actually became a U.S. citizen himself. “Joe could be deported. I think it would be a tremendous injustice, given that he’s been here since he was 1 year old,” Feinsten said. “His parents and brothers have been naturalized, and Teresa and the children are citizens. Joe not getting U.S. citizenship, just slipped through the cracks. He could have gotten it easily. He thought he was a citizen, as did everyone else. The fact that he wasn’t was brought up in the state case, he didn’t know up until then.”

Joe lost his father Frank Giudice June 18, after he collapsed at Joe and Teresa’s house while playing with his grandchildren. Kathy Wakile, Joe and Melissa Gorga, Dina Manzo and two new RHONJ cast members Nicole Mauriello and Teresa Aprea come to Frank’s funeral, but Caroline Manzo and Jacqueline Laurita did not attend the services.

Teresa is reportedly not handling the possibility of going away to prison very well. A source told Radar Online that she sought advice from her family minister after experiencing anxiety attacks and insomnia. “Spending time with her family minister is helping during a very dark time. She has always been extremely religious and is relying on it more now than ever.”

Teresa’s brother Joe and his wife Melissa have said they would take in Teresa and Joe Giudice’s four children if they both go to prison at the same time, but Joe Giudice said on Watch What Happens Live that that would never happen because of everything that’s been said on television. In the event that both Joe and Teresa serve time simultaneously, the kids will most like stay with Joe Giucide’s siblings.