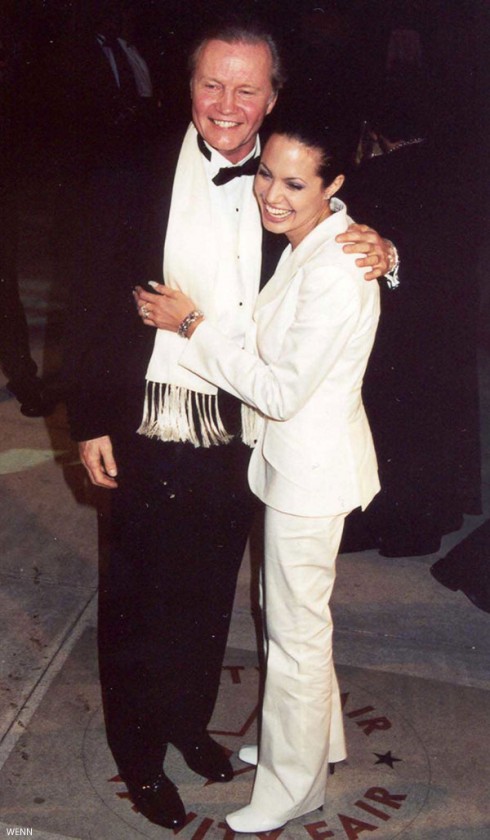 Angelina Jolie’s dad Jon Voight found out about his daughter’s double mastectomy online like the rest of usf. The actor used to be estranged from his daughter, but they’ve become closer in recent years. In fact, he said he just saw Angelina and Brad a few days ago but still had no idea.

“My love and admiration for my daughter can’t be explained in words . . .I was as surprised as anyone and deeply moved by the way she’s handled this,” Jon told the New York Daily News.

He said that he “respected” why she kept this information from him for three months. “I completely understand,” he said. “I want the focus to be on the inspiration.” He spoke with his daughter about the procedures she’s had done, but didn’t discuss the global phenomenon she created with her disclosure, “She just explained to me and educated me on this stuff.”

Jon and Angelina had a very public 10-year falling out starting in 2002 when he criticized her for having “serious mental problems,” and she accused him of cheating on her mother. Angelina’s partner Brad reportedly help them end their feud and become a part of each other’s lives again in late 2011. Jon was able to meet his six grandchildren, and says he was able to see the situation in a different way. “I suddenly saw things differently and everything shifted. That one moment changed my whole life,” he recalled at the time “It gave me back my daughter and my family. Being reunited with my Angie is very precious to me. I adore my grandchildren, they are my great love. It makes me so emotional and grateful. When my daughter sees me with them she says she sees another energy in me which takes over. I’m always laughing and completely happy when I’m with them. It makes Angie so happy too, as you can imagine.”