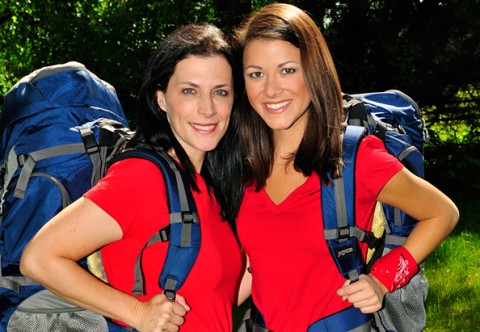 CBS’ Amazing Race features a really unique team. The members have only met face-to-face three times before, but they’re mother and daughter.

21 years ago Andie DeKroon (now a 43-year-old stay-at-home-mom with 10 other kids) gave Jenna Sykes up for a adoption. Now they’re getting to know each other on national television. This may be the most compelling team in The Amazing Race‘s history.

In her bio questions Andie explains:

I want to get to know this person I brought into the world. I feel the opportunity of being together 24/7 for a while on the Race would give us the chance to know each other in a deeper way than we would if we met under normal circumstances.

Andie, who lives in Atlanta with her IT Consultant husband Joe, first received contact from Jenna in 2008. She was attending college in nearby Athens, GA, and starting a letter correspondence with her birth mom. She didn’t want to jump in head-first right away.

In 2009 she posted on Twitter a wistful tweet about wishing she could do Amazing Race, and Andie decided that was a fabulous idea. They met in person with their families, and the encounter was so natural they decided to audition for the show.