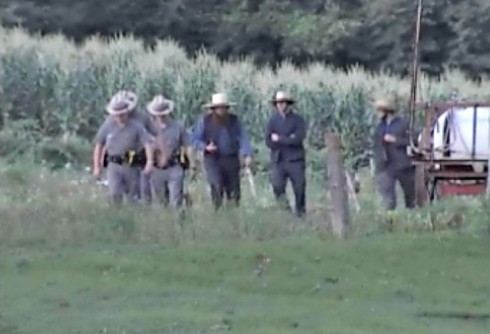 Two young Amish girls who were snatched from their family’s roadside stand on Wednesday evening are back home, but the search for their abductors continues.

WWNY reports officials in Upstate New York believe Fannie Miller, 12, and Delila Miller, 6, were kidnapped by two men around 7:40 p.m. on Wednesday. The men took the girls to a nearby home, but left them there around 8:30 p.m. with the instruction to stay put. Instead, the girls ran from the home and were found by another local man. (The search for the girls continued throughout the night and Thursday, so the timeline of their escape isn’t clear.)

“The children seemed to be healthy, a little wet and cold,” said St. Lawrence County District Attorney Mary Rain. The girls were interviewed by police and examined at the hospital before spending Thursday night back with their family.

St. Lawrence County Sheriff Kevin Wells said the two kidnappers remain at large. He added, “We have the safe return of the two girls, but at the same time we have a lot of work to do. There’s still been a crime committed here, these girls were still taken away from their homes.”

State senator Patty Ritchie, who spent time with the girls’ family when the search was ongoing, said the Miller parents never lost faith.

“When I was talking to the father, one of the main points he was making was ‘It’s in God’s hands,'” she said. “We went to a candlelight vigil, prayed for the family and shortly after got good news.”

Victoria Wilcher, 3-year-old mauled by dogs, asked to leave KFC because her face was ‘scary’