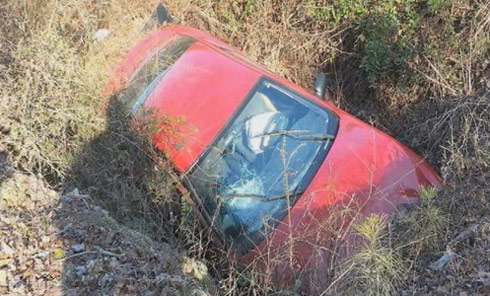 A North Carolina family is outraged after the body of 62-year-old Carolyn Ann Watkins was discovered in her wrecked vehicle 3 days after it was towed.

Watkins’ son, Al Parker, assumed that his mother was visiting with friends over the weekend but became concerned when she did not show up at her job on Monday and reported her missing. Detectives were able to match the description of her 2000 Pontiac coupe (seen above) to a Highway Patrol report of a car found in a ditch on Friday and towed to an area towing company’s lot. When the investigators followed up, they discovered that Watkins’ body still remained in the floorboard of the car.

North Carolina State Highway Patrol Trooper Marlon D. Williams, who processed the scene, noted in the official accident report: “No driver at the scene of this collision.”

Now family and friends are irate, believing there may have been gross negligence on the part of Mr. Williams.

Parker stated, “They pulled the car out Friday, that morning and they didn’t see nobody in the car. They didn’t check it.” Another one of Watkins’ sons, Calvin Wooten, expressed the same sentiment when he said:

“It could have taken two seconds for him to peep his head into my mom’s car to see if she was still in there.”

Her sons state that Watkins was underneath the deployed airbags with her leg caught behind the brake pedal. The family added that the worst part is that they don’t know if Watkins was still alive when her wrecked car was pulled from the ditch. “I mean if she was still alive it does sounds like it may be murder to me. He definitely did not do his job,” said Wooten.

Patricia Parker, the daughter-in-law of Watkins, added that the police told the family that the wreckage was found by an off-duty trooper who called the accident in that led to Williams responding.

Williams, a 9-year veteran, has been placed under paid administrative leave pending an investigation.

The family of Carolyn Ann Watkins are waiting on the results of an autopsy in hopes of discovering exactly how, and when, she died.