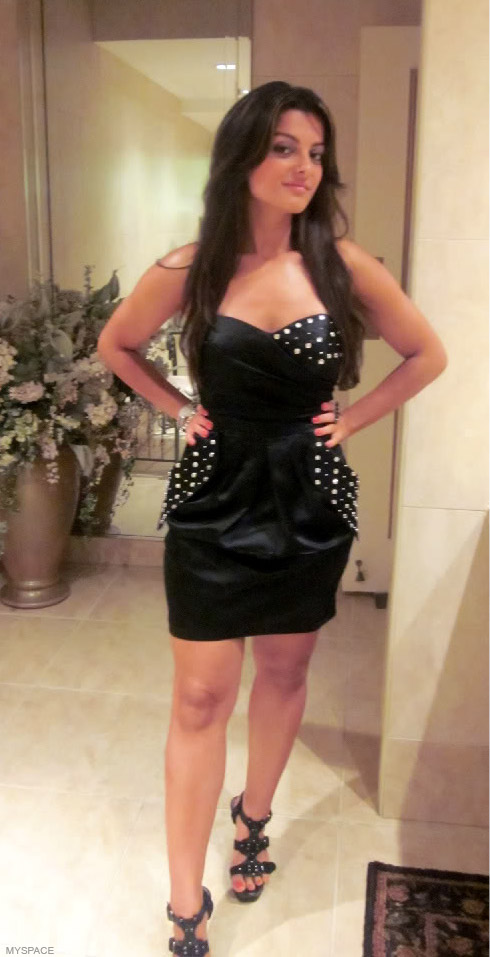 Fall Out Boy bassist Pete Wentz has finally announced who the mystery singer is for his new project the Black Cards, revealing to Rolling Stone in an interview that her name is Bebe Rexha and that “she’s a twentysomething from Staten Island with virtually no experience in the music business.”

Wentz tells the magazine he was with producer Sam Hollander (of S*A*M & SLUGGO) when he heard a voice blasting from the studio next door. The rest, as they say, is history.

So who is Bebe Rexha? She’s a dance music singing prodigy from the Big Apple who began singing at the age of 4 and continued to pursue her love of music through high school with stage appearances in musicals like “Hello, Dolly!,” “Jesus Christ Superstar,” and “Fiddler On The Roof.” She also spent a great deal of time honing her songwriting skills and feeding her musical appetite by listening to musicians such as Stevie Wonder, Tori Amos, John Legend, and The Temptations. 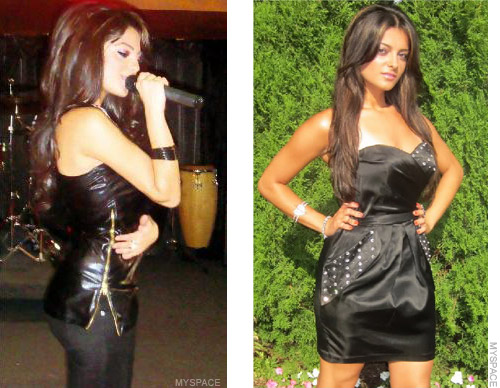 Bebe is the whole package, possessing a five-octave vocal range and a real talent for songwriting that earned her “Best Teen Songwriter” at the National Academy of Recording Arts & Science’s annual New York “Grammy Day” event. (An event at which she was able to meet numerous famous musical producers in addition to former pop star Chris Brown.)

In other words, she is the perfect raw talent to put some experienced production and money behind! (And speaking of “behind,” I don’t want to fail to mention that Bebe is SUPER FINE, as I’m sure you can tell from the various photos.) It appears Pete Wentz is a little tentative about Bebe’s songwriting skills though, preferring to pen most of the band’s songs himself. He tells RS that we can expect something different from Fall Out Boy’s infamously emo broody tunes:

“Fall Out Boy lyrics were vastly depressing, misogynistic kinds of stuff,” he says. “That really doesn’t work in a band with a female singer. There’s a couple of songs from my perspective and others where I use a metaphor for my perspective.” Musically, Wentz says he’s expanded his influence, too. “I’m more musically free in this project than I ever was in Fall Out Boy. Patrick [Stump] was the composer in Fall Out Boy, and this is my chance to do something completely different.”

You can hear snippets of the Back Cards songs “Club Called Heaven” and “Beating In My Chest” at BlackCardsMusic.com 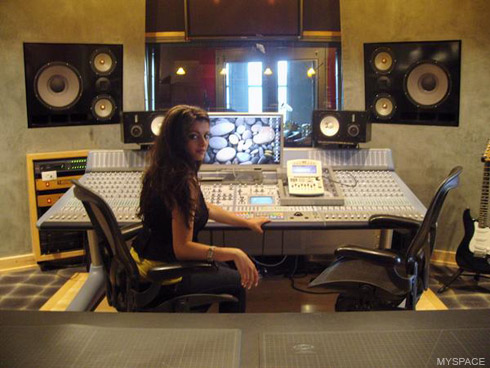 Bebe Rexha had a number of videos on YouTube prior to her involvement with Black Cards, but they have been deleted for the most part. There are still a few remnants of the old “pre-BlackCards” Bebe out there on the interwebs though, including a few of her songs. Here is the list of links I was able to compile, with embedded media included when possible:

Bebe Rexha’s MySpace profile at myspace.com/beberexha is still active for now, though all of the songs and videos have been removed. There are still a few photos up, a couple of which are included in this post.

Bebe also had a separate “songwriter” MySpace profile at myspace.com/songwriterbeberexha where there is still a version of her song “Two of Them” available to listen to. In addition to Bebe’s version of the song, there is also a version by Korean singer Lee Hyori and Wilber Pan of Taiwan that was featured in a Chinese Hyundai commercial. That version of the song has lead to accusations of plagiarism as Bebe claims she was never asked permission and never received compensation for use of the song! Here is Bebe’s statement from MySpace about the incident with a video of the two version meshed together:

Hey Everyone. My name is Bebe, I’m a singer songwriter from New York City. I want to talk about Lee Hyori’s Plagiarizing scandal. I recently read that she had admitted to plagiarizing 6 of the songs on her new album H-LOGIC.

I thought that I was the only one who was a victim of her plagiarizing. My song “Two Of Them” which I wrote in January 2009 was released without permission, in a Major Hyundai commercial and music video in September which was sung by Lee Hyori and Wilber Pan in China. The original words and title were changed but All Of the Verse, Chorus, Bridge and Ad Lib Melodies were copied exactly like my original version. My team and I tried our best to get in touch with Hyundai and Hyori’s team but we had no luck. I never gave anyone permission to use my song and I never got any credit or was ever compensated.

The day I found out about my song in the Hyundai Commercial was bittersweet. I was shocked to see my work being sung by Lee Hyori and Wilber Pan, but I knew that the whole situation wasn’t right because my song was stolen. I was really sad about it cause I felt like someone had robbed me of my hard work. I worked 12 hours in the studio the day when I created “Two Of Them,” and someone just took it and passed it on as their own. After a while, I kinda lost hope and tried to put it all behind me. I tried to take it as a learning experience.

I honestly don’t believe that it was Lee Hyori herself stealing these songs. I don’t think she is at total fault.

I don’t want to point fingers at any one. I’m just glad that the truth came out. For months I would cry in my room wondering why this had to happen to me. Artists work very hard on getting there music together and it’s 100 times harder for up and coming artists. We put our blood sweat and tears into our music and for some of us, its all we have.

As for big artists like Lee Hyori, she should make sure she can trust the people who are working on her team, because their actions are reflected upon her career.

I hope this never happens to any other artist, ever. It doesn’t matter if you’re a famous artist or an up and coming artist, it’s the worst feeling in the world when you find out your song was taken from you and its even worse when there’s nothing you can do about.

But that isn’t the only “Two of Them” plagiarism controversy! There seems to be a bit of debate over whether or not Bebe knew the song was going to be used. She posted this blog entry on MySpace on August 23, 2009 with the commercial embedded:

My song will air on Chinese Hyundai Commercia feat. Lee Hyori and Wilber Pan
Current mood: excited
My song “Two Of them,” which I wrote and vocal styled, has been translated and re done by Korean Superstar Lee Hyori and Taiwanese superstar, Willber Pan For an up and coming HYundai commercial….The commercial will be launching their two new cars… Lee Hyori’s fourth album is also in the works..

A friend commented on her entry by saying, “gotta love the international part of the music industry,” to which Bebe responded, “definitely!”

ANYWAY…. I’m sure worrying about her royalties over an overseas Hyundai commercial is the furthest thing from Bebe Rexha’s mind right now! So, lets’ get back to listening to her great voice and songs!

Here is Bebe’s version of “Down:”

And just in case there were some of you arrogant acoustic snobs out there thumbing your nose at America’s next sexy superstar, here she is pickin’ and lookin’ sultry! 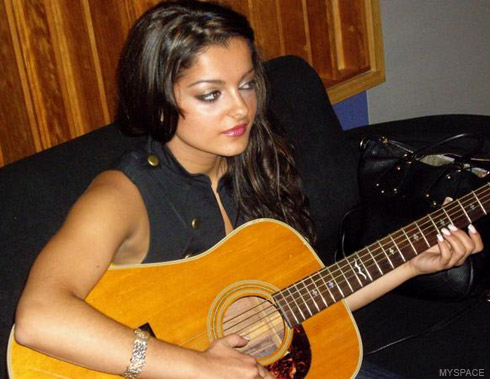 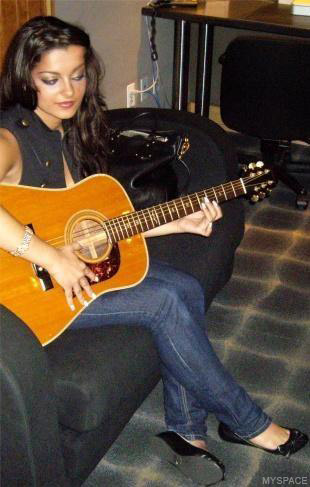 All I can say is Ashley Simpson better look out! That there is nothing but TROUBLE – that wonderful, sexy, talented kind of trouble that ain’t nooooooooooo good when you’re married and trying to raise a family!

UPDATE 2/9/11 – Uh oh. It was announced earlier today that Ashlee Simpson has filed for divorce from Pete Wentz.

“Pete Wentz = Douche Bag” Frustrates Pete Wentz – But Not Us!