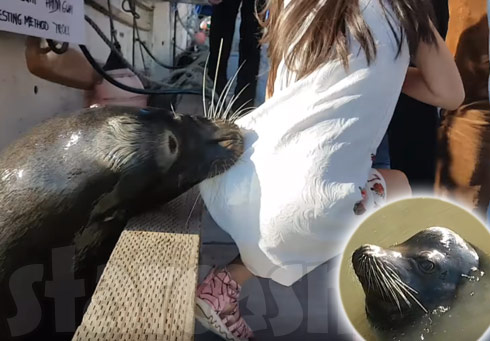 The family of a young girl seen, in a now viral video, being shockingly dragged into the water by a sea lion is being dragged by city authorities.

The video, which was posted on May 20 by a student who was on hand in the city of Steveston, British Columbia during the frightening ordeal, already has over 20 million views. Everything seems harmless enough in the clip as an adorable looking sea lion plays next to a dock. A young girl eventually sits on the side of the pier, when in the blink of an eye, the sea lion grabs her by the dress and pulls her under.

Robert Kiesman, chair of the Steveston Harbour Authority, was dumbfounded by the actions of the people seen in the viral video. Especially the young girl’s family:

“You wouldn’t go up to a grizzly bear in the bush and hand him a ham sandwich, so you shouldn’t be handing a thousand-pound wild mammal in the water slices of bread. And you certainly shouldn’t be letting your little girl sit on the edge of the dock with her dress hanging down after the sea lion has already snapped at her once.”

Kiesman wasn’t done either adding, “You can only spend so much time protecting people from their reckless behavior. We’ve now seen an example of why it’s illegal to do this and why it’s dangerous and frankly stupid to do this.”

Reports indicate that in spite of the scare, the girl who was grabbed by the sea lion suffered no injuries and is doing well.