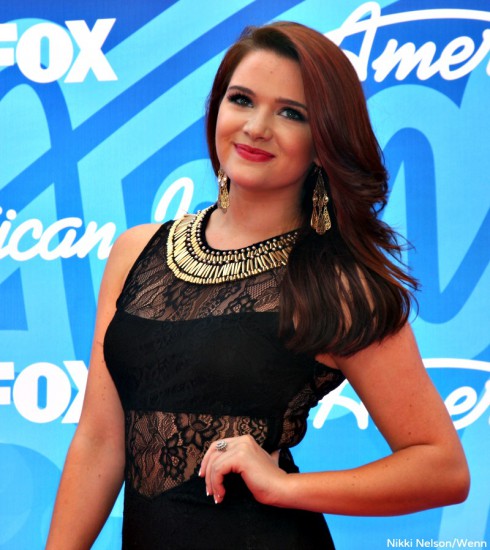 Actress Katie Stevens won’t have to fake it with any potential singing scenes in the new comedy, Faking It… She was a finalist in the 2010 season of American Idol.

Katie auditioned for the show in 2009, when she was just a 16-year-old high-school student from Connecticut. In her emotional introduction tape, Katie talked about helping take care of her grandmother, who was dealing with Alzheimer’s.

“She’s probably not going to remember me for much longer, so I want her to see me succeed in my dream before she forgets who I am,” Katie said at the time.

After singing “At Last” in her audition, Katie was voted through to the next round by all of the judges.

Once in Hollywood, Katie secured a spot in the live rounds of competition. She sang a beautiful rendition of “Let It Be” in one of her more memorable performances…

She ultimately finished in eighth place. Lee DeWyze went on to win the competition with Crystal Bowersox coming in second.

After the show, Katie returned to Connecticut to graduate from high school before going on the American Idols LIVE! tour that summer. She then moved to Los Angeles to pursue music full-time. She also stated a YouTube channel, which has more than 10,000 subscribers. Her most-viewed video is a cover of Bruno Mars’ “When I Was Your Man” with Michael Castro.

Still, Katie recently told hometown paper The Courant that the path to success wasn’t as simple as she expected post-Idol. She ended up working in a cupcake shop to make ends meet.

“I had a moment one of those days where I felt, nothing is happening for me,” Katie said in January. “Nobody wants to work on my music with me, nobody wants me to be on their shows. And it was kind of at my rock bottom point.”

Right around that time, the tides turned and Katie’s headshot was noticed by a Faking It casting director.

“She was hiding the fact that she’s an incredibly gifted actress,” said Faking It creator Carter Covington. “She has a girl next door quality that I find just bewitching.”

Katie added, “American Idol got me out here. It got me being able to do what I love, which is both singing and acting.”