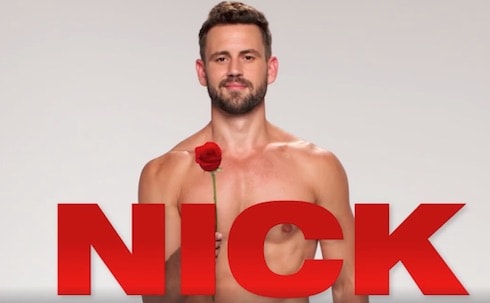 “Nick has had his heart broken three times, but Monday, January 2nd he’ll get another chance to find the one and these 30 single women can’t wait to get some Nick,” a voiceover said as brief clips give fans a sneak peek of what’s in store for the next season.

But first, ABC reminded fans of Nick’s journey as a member of Bachelor nation. The clip opened with Nick’s second break up as a runner up on Andi Dorfman’s season of The Bachelorette, then cut to the first time he got his heart broken during Kaitlyn Bristowe’s season.

Most recently, the 35-year-old Wisconsin native had a fling with Jen Saviano, who appeared on Ben Higgins’ season of The Bachelor. But they broke up during season three finale of The Bachelor/The Bachelorette spinoff Bachelor in Paradise. Now that Nick is very single, his 30 single contestants are definitely ready to mingle with him.

Still on my journey, but breaking my silence to share when you all can see it for yourselves!!! Get ready… it all starts January 2nd!! #thebachelor #thebachelorabc #january2 @bachelorabc

“I want Nick right now, right now,” a blonde contestant told the cameras. During the promo, clips of Nick flashed by where he was both shirtless and wearing a suit, holding the show’s signature symbol—a red rose.

As for Nick, he thinks he’s “killin’ it” as this season’s heartthrob, and he said so in front of all the contestants during a cocktail hour.

ABC announced that the franchise fan favorite would be returning for his own season back in August during the reunion special Bachelor In Paradise: After Paradise.

? It's official! @nickviall is #TheBachelor! ?

“I’m definitely ready for it, I’m very excited,” Nick said at the time, according to ABC. “I’ve had an interesting journey throughout this process. It hasn’t worked out so far and hopefully this time around maybe things will end up on a more positive note.”

Watch the clip above to see a shirtless, sexy Nick Viall in the first promo for season 21 of The Bachelor, premiering January 2 at 8 p.m. on ABC.