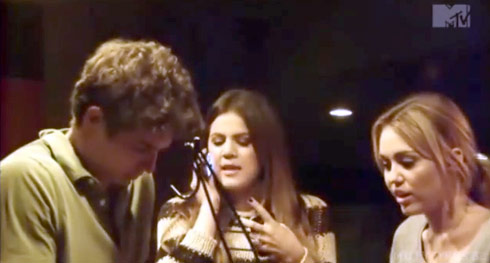 MTV’s prankster series Punk’d returns on March 19 and the network has released a rather startling preview clip featuring Miley Cyrus and Kelly Osbourne pulling a There’s Something About Mary sausage grinder prank on an unsuspecting Khloe Kardashian. In the video a delivery man asks to use the bathroom and then pretends to get his Lamar Scrotum caught in his zipper. MTV programming ensues.

Kudos to Khloe for handling the whole thing so calmly! Not only did she calmly call 911 and relay what the operator was telling her, but she seemed to have no inhibitions about the seemingly awkward nature of the medical problem at hand. Here’s a transcript of the call, which could very well be the biggest waste of words in my lengthy history as a celebrity blogger:

Khloe Kardashian: Sir, he’s got his balls caught in the zipper of his pants.

911 Operator: Who am I speaking with?

911 Operator: Will you please get the gentleman on an elevated surface. Like a counter top, on his back.

Khloe Kardashian: He needs to be on a counter top, elevated on his back.

911 Operator: Is any kind of seminal fluid coming out of the genitals?

Khloe Kardashian: Is there any fluid coming out of his genitals?

911 Operator: What color is the genital right now?

Khloe Kardashian: It’s getting, like, I can tell it’s deeper in color.

Delivery Boy: ARGHGHG!! I need to stand up!

Khloe Kardashian: Sir, the paramedic said if you do not lay down you could lose your testicle. Please.

In the end I think Khloe was the one who punk’d Miley and Kelly because their little prank did little to faze her at all. (In other words, it was kind of a boring punk fail.) But, that doesn’t take anything away from the acting job done by the guy who played the delivery boy! His Oscar-worthy performance was to be commended, especially early on when he screamed, “Oh it’s in there! It’s in the zipper!” Good stuff!

Maybe Khloe can learn from this little episode and use the knowledge to help get another large piece of meat unstick from her family. (Yes, that was a vague, lame reference to Kris Humphries.)

I don’t know much about this show, but I assume they use a fake 911 operator, right? I’m hoping it’s illegal to take up their time with prank calls.

By the way, does anyone else get the impression from that photo at the top of the post that this may very well have been the first time Miley Cyrus has ever seen a penis?