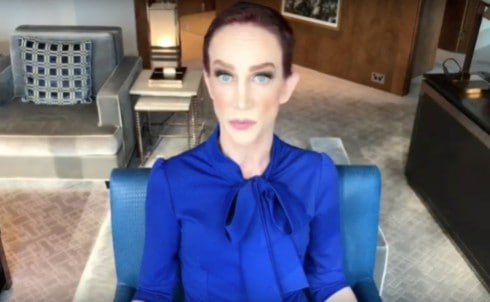 Kathy Griffin is following up her Trump photoshoot controversy by yet again causing waves within the entertainment industry. This time, her focus isn’t on the President but against Bravo and TMZ head honchos Andy Cohen and Harvey Levin.

Before we get into it, let’s back up 24 hours to give you a little background…

On Friday, Andy Cohen was interviewed by paparazzi. Throughout the impromptu interview, Andy was agreeable and conversational but began playing dumb when questioned about Kathy Griffin. Cohen pretended he didn’t know Kathy saying, “I’ve never heard of her.” 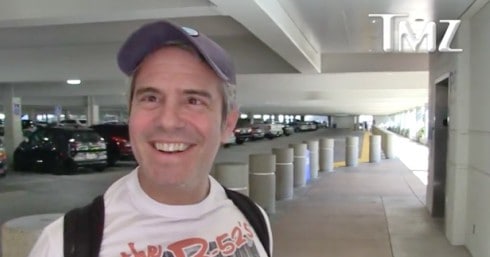 Andy was a producer on Kathy’s Bravo reality show My Life of the D-List so there’s no question he absolutely knows Kathy. While we aren’t sure exactly what happened to cause the bad blood, it’s clear the two aren’t on good terms.

Andy’s paparazzi interview appeared on TMZ and was re-tweeted by Harvey Levin on his personal Twitter.

A day after the video was released, Kathy made her own video in which she discusses both Andy Cohen and Harvey Levin in great detail. In the 17-minute-long YouTube video, Kathy reveals personal information about Andy and Harvey as well as stating defamatory facts against them.

The video begins with Kathy playing a voicemail from Harvey. In the message Harvey says, “If you have a minute, could you give me a call? I’m at 818-972-xxxx. Hope all is well.”

Kathy’s response? “So that’s his number, and I don’t have a minute to call him. Maybe you do.”

Kathy says the reason she revealed Harvey’s phone number is in retaliation to the backlash she received after the now infamous Trump photo. She claims the phone numbers of her mother and sister were released resulting in harassment and death threats against them.

“So that’s why I’m putting that out there,” Kathy explains.

Throughout the next several minutes, Kathy goes on to air her grievances against Andy and Harvey. The video is too long to write out verbatim but the points she makes are summarized below.

Kathy’s claims against Andy Cohen:
– He was a “miserable” boss
– He offered her cocaine before her appearances on Watch What Happens Live
– He “lives to take women down”

Kathy’s claims against Harvey Levin:
– He speaks to Donald Trump multiple times a week and TMZ is “very much in bed with this administration”
– He’s ageist against women and “lives to take women down”
– TMZ is a “deeply misogynistic website”

Kathy also calls out various industry folks including a network president, executive producers, agents, publicists, and managers claiming she had “no support” and they didn’t “protect” her.

You can check out the full video below. Keep in mind, it’s definitely NSFW.

The big question is why would Kathy retaliate by making this lengthy video?

According to Kathy, it all relates back to her Trump photo. Her verbatim answer is below with the main points in bold.

The reason I am doing this tape, because of the Trump photo, because of the faux outrage, that was pushed by Anderson’s tweet and TMZ and obviously, literally, the Federal Government- I’m the first person to be put under a federal investigation by the Department of Justice for two months at the tax payer dollar’s expense- I’m putting this tape out because I’m now on my world tour and it’s selling out and so far every night the audience have stood at the end of every show and that is a fact. So when the bots go on your timeline and say that it didn’t happen, they are bots and that’s their game. But I just want you guys to know that tonight I have a show in Melbourne. I’m very excited. And I have a show in Perth, Australia after that and then I have a show in Singapore. And the reason I’m making this tape is everyone has scared the hell out of me that I’m going to be detained because I’m on the INTERPOL list so look up what the INTERPOL list is. I’ve also been told I’m on something called the Five Eyes list. I was on the No Fly list for two months. So I’ve been detained, alone, at every single airport I’ve gone to. So when I go to Singapore if I just don’t return, I just want you guys to know, that’s why. Because I took a picture of a mask with ketchup on it. It was not illegal. You may have hated it, but if any one of your kids took that picture and put it on Twitter, they shouldn’t have to be on the Interpol list or be detained or be under federal investigation.

After the video was released, Andy tweeted, “I am completely stunned by this story. It is 100% false and totally made up.”

I am completely stunned by this story. It is 100% false and totally made up.

What do you think about Kathy’s rant and accusations against Andy and Harvey?

Andy Cohen shuts the door on Caitlyn Jenner, leaves it open for Sophia Hutchins on RHOBH