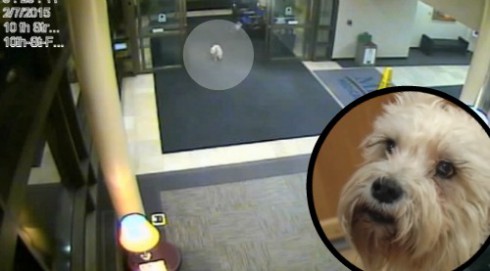 What’s a dog to do when they can’t pick up the phone or ask for a ride to visit their hospitalized owner? In the case of Sissy, a miniature schnauzer from Cedar Rapids, Iowa, the answer was to break out of the yard and make the trek on her own.

“She had never run away before,” owner Dale Franck told KCRG, explaining he was devastated to discover Sissy broke out of the yard.

That was until four hours later when someone from the Mercy Medical Center called to say Sissy was there — just like her “mom,” Nancy Franck, who was recovering from surgery.

“She wanted to go see her mom. She was on a mission but she couldn’t find the right elevator to take,” daughter Sarah Wood said, referencing the security footage that showed Sissy walking into the hospital.

Security guard Samantha Conrad said they were just as surprised to see a dog wandering the halls, especially after they realized the pup traveled some 20 blocks to get there. As she said, “It was quite an amazing journey that this dog made.”

The one thing the family can’t figure out is how Sissy knew where to go, considering they never brought her to visit Nancy during her two-week recovery. They guess she wandered through the wrong doors after trying to visit Nancy’s office, which is next door. Either way, they’re glad it worked out the way it did…

“That was great just being able to see her. That was perfect,” Nancy said. “I’m glad she thought of it.”