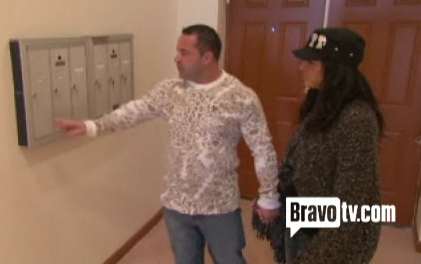 Tonight on The Real Housewives of New Jersey we see Joe Giudice show his wife Teresa one of his new business investments: a pizzeria/laundromat/apartment complex.

That’s kind of an odd combo, but it gets even more strange when you consider the Giudice’s recent financial snafu. During the fall of 2009 the couple filed for bankruptcy, which was around the time this footage was shot. They claimed $11 million of debt and only $79,000 of yearly income.

This month, however, they ran into some trouble in bankruptcy court. According to the Wall Street Journal Chapter 7 trustee John Sywilok, who was in charge of accounting for their assets, found that the couple may not be able to go through with the debt relief because they may have concealed some of their assets from the court.

And that’s where pizzeria/laundromat/apartments come in. These were assets that weren’t claimed when the bankruptcy was filed, along with any advances from Teresa’s book Skinny Italian, and income from Teresa’s clothing and accessories company TG Fabulicious.

Sywilok is also not only aiming to prevent the Giudices from having their considerable debt relieved, but is pulling for an auction to be held Aug. 22 to selling the furniture and decorations from their Towaco, N.J. mansion.

Both Teresa and Joe made quite a show of building and decorating their lavish, multi-million dollar home, which is heavily accented with onyx and marble. Teresa famously laid down $100,000 for one room’s worth of furniture during a first season segment.

Most reality stars these days put themselves in debt to appear to be more wealthy than they really are, but the Giudices are definitely taking that mind-set to a whole new level.