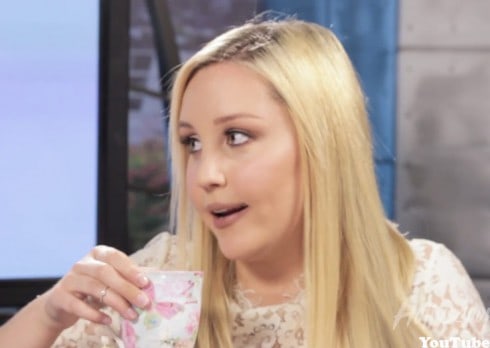 Amanda Bynes has opened up about her new life in her first interview in four years!

The once-troubled actress suffered a very public meltdown that included two DUI arrests, two hit and run charges, and a number of bizarre incidents which kept her up front and center in the celebrity news universe.

For example, here are some of our previous posts on Amanda:

VIDEO Amanda Bynes dancing up a storm before shoplifiting

Amanda Bynes says there’s a microchip in her brain, wants $1 from everyone reading her mind

In a surprising move, Bynes caught everyone up on what she’s been up to in a lengthy sit down with Hollyscoop. There was no heads up or promotion to speak of really, but it was worth the wait as Bynes sipped tea and talked plans for the future:

And here are the highlights of the interview if you don’t have time to watch the entire thing:

–> Amanda says she’s been going to fashion school and that she intends on launching a clothing line in the future.

–> She said, “I feed the homeless and that’s been really interesting and fun.”

–> She intends on relaunching her acting career as well. She thinks she’ll do TV, beginning with a few guest spots on her favorite shows.

–> She verified that she did want Drake to murder her vagina, as she infamously tweeted back in March of 2013.

I actually wasn’t being insincere. I was saying ‘murder my vagina.’ I was serious but I was also on drugs. So that was my way of saying, like, ‘let’s do it man!’ But I was on drugs and trying to be hilarious.

I stole her look. I was getting the microdermals in my cheeks because she had them and I though they looked super hot on her. I never said that she stole my look.

In September of 2016 Bynes’ attorney addressed reports about Amanda’s mental health. “There has been much speculation about Amanda’s medical condition. She asked me to dispel certain rumors. For the record, Amanda does not have schizophrenia, nor has she ever been diagnosed with it,” People was told.

Amanda’s mother, Lynn Bynes, added, “Amanda has no mental illness whatsoever. She has never been diagnosed as schizophrenic or bipolar.”

Amanda Bynes has an eating disorder