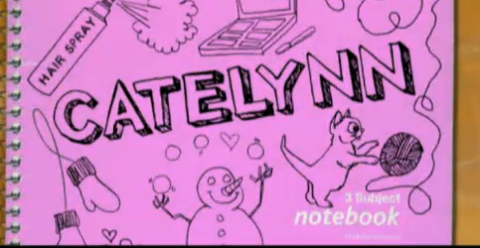 The full episode is at the bottom on this post. I highly recommend that you take an hour to watch Catelynn and Tyler’s amazing story.

Catelynn’s story (often misspelled Caitlynn by Googlers) was definitely the most intense and moving episode of the compelling 16 and Pregnant MTV series. The last episode dealt with Whitney, who certainly wasn’t dealing with an ideal situation, but did have a supportive boyfriend and compared to Catelynn, relatively stable adults in her life (We’re talking extremely relative here).

Farrah, who appeared send in the seasion, appeared to have a pretty comfortable situation at home (despite that her mother with the awesome Farrah Fawcett hair often seemed a little too coldly rational), but definitely had the most absent baby-daddy. The stories then slowly inverted with family life getting more unstable for the girls as the young men who fathered the children became more present in the situation. During Whitney’s episode, her boyfriend Weston stuck by her, and tried to provide for their growing family despite cut-backs at work. Weston really shined when the baby came home and he cared for the him with an attentiveness and tenderness many fully prepared adults cannot summon. Whitney’s family situation seemed to be in turmoil and her boyfriend seemed to be devoted, but Catelynn’s story took these characteristics to the extreme.

Catelynn’s a smart, charming, rosy-cheeked Michigan girl with a chipper, strong voice. She immediately addresses the lack of stability in her life, noting that she’s moved 13 times during her childhood. She describes her mother April as “pretty unpredictable” and capable of meanness. April’s got the look of a lady who lives off of meth and menthols, and the camera catches her mouthing “B*tch” as she closes a door on her daughter.

Catelynn’s boyfriend is a sweet-faced skinny kid named Tyler. He’s got a penchant for too-white hip-hop clothes with smooth, bright designs and starched popped collars. The clothes swallow him up and make him look too young, too vulnerable. His dad’s name is Butch, and he’s been in jail a few times. Butch has a mustache TO DIE FOR, and much like April, always looks like he could use a sturdy scrubbing with lye soap and a hearty home-cooked meal.

But here’s the kicker: *SPOILERS BELOW*

That’s right, Catelynn and Tyler are step-siblings, but that doesn’t count in their minds because they started dating before their parents did. Actually this part of the situation isn’t a big deal compared with the rest of the story, it’s just an odd detail.

While their parents look like they need to be washed-down and rehabbed, the kids are healthy, clean, and clear-minded. They are assessing their situation with hard, clear eyes, and feel the weight of it deeply. It takes a special kind of strength and wisdom to know what you can and can’t handle. Many people find it easier to be blind to certain things they should see. But these kids see and they know, so they decided to give the child up for adoption despite the fact that their parents are relentlessly, and foolishly, dead-set against it.

Catelynn and Tyler are the only ones who seem to understand the gravity of their situation. At first it seems they are just making a pragmatic decision to not further complicate their own chaotic lies, but it quickly becomes  apparent that these two teenagers develop a deep love for their child, and that is why they’re giving her up. At times their journey is so brave and raw and touching, it is almost unbearable to watch. But it is worth it.

These kids are tough and focused, and they’ll undoubtedly keep making good and tough decisions as they continue to build their lives. They weren’t afraid to do a painful thing because they thought it was the best thing, and furthermore they weren’t afraid to have cameras filming them at their most vulnerable.

All of the kids featured on 16 and Pregnant are brave. They are generously sharing their stories, which will help countless other teens and their families cope with difficult situations and decisions. Tune in to MTV Thursday, July 23 10p.m. Eastern to was the special finale episode “Life After Labor” hosted by Dr. Drew.

Click here to read Catelynn’s blog about “Being at peace with her decision.”

Click here to read an interview with Catelynn at Mama Pop