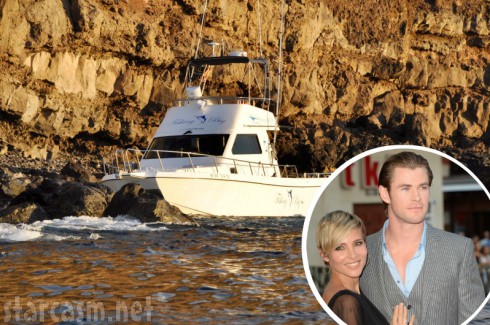 Chris Hemsworth took method acting a bit too far on Sunday. The Thor actor was sailing with his pregnant wife, their 18-month-old daughter and a few others when their catamaran ran aground off the coast of Spain’s La Gomera Island. Coincidentally, Chris was in the region to film Ron Howard’s In the Heart of the Sea, which is about the 1820 whaling accident that served as inspiration for Moby Dick.

A lifeboat, Civil Guard patrol boat and a helicopter were dispatched to rescue the stranded passengers. An ambulance met them on solid ground, but none of the passengers required medical attention.

“Nobody was hurt but any kind of rescue at sea is a scary event, especially for a pregnant woman with a young child,” a source told The Daily Mail of Chris’ wife, Elsa Pataky, and their daughter, India Rose. Chris and Elsa confirmed just last week they are expecting their second child.

Sunday’s dramatic incident will surely give Chris something to talk about during his press tour for In the Heart of the Sea. The film, based on Nathaniel Philbrick’s book by the same name, is a historical account of the whaling accident that brought down The Essex and left its crew members stranded at sea for three months.