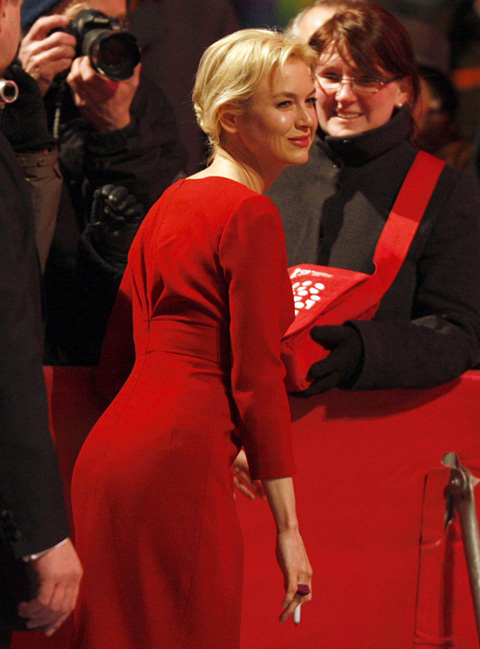 Renee Zellweger can guiltlessly snack on Snickers pancakes and fried dough ‘n lard because she’ll have to get back up to a whopping* 135 lb. for the third Bridget Jones movie installment. According to Variety, the movie, which is still untitled, will start shooting sometime in 2010. There is no slated director or writer for the film, but Zellweger, who is undoubtedly hungry to get back into her role as the adorable blundering Bridget, has signed on. It’s also unknown if Hugh Grant or Colin Firth will reprise their roles as Bridget’s love interests/potential baby daddies.

The plot is rumored be based on Bridget Jones creator Helen Fielding’s column she wrote for the Independence chronicling Bridget’s struggle in her 40s to procreate before her eggs go bad. My guess is that at some point in Bridget’s baby frenzy she’ll be knocked up by Hugh Grant’s character while dating Colin Firth’s character but will end up with an entirely different man, I’m thinkin’ maybe this guy.

Brits were understandably upset in 2001 when the American Zellweger got the part because although the character Bridget Jones represents everysinglewoman, she is also uniquely British. Many were hoping for Kate Winslet or Helena Bonham Carter, but Zellweger pulled off the accent and very naturally portrayed Bridget’s endearingly insecure and faux pas-ridden personality.

*My little soapbox: I’ve always thought too much of a big deal is made about Bridget Jones’ weight, because although Bridget’s not thin, weighing between 130-140lbs. can be a healthy weight for a 5’5″ woman. Renee Zellweger often tells the press that she puts on 20-25 lbs. to play Bridget, which means she normally weighs 110-115 lbs, which is really frickin’ small. Of course, Bridget isn’t the picture of health, she smokes, drinks too much and often binge eats or eats nothing at all, but it’s her behaviors that are unhealthy, not her weight. Helen Fiedling herself said it best “‘I think it’s a great, very endearing performance, though I’m slightly depressed that even after she put all that much publicized weight on, she’s still significantly thinner than me.”

Catch up on Bridget Jones: