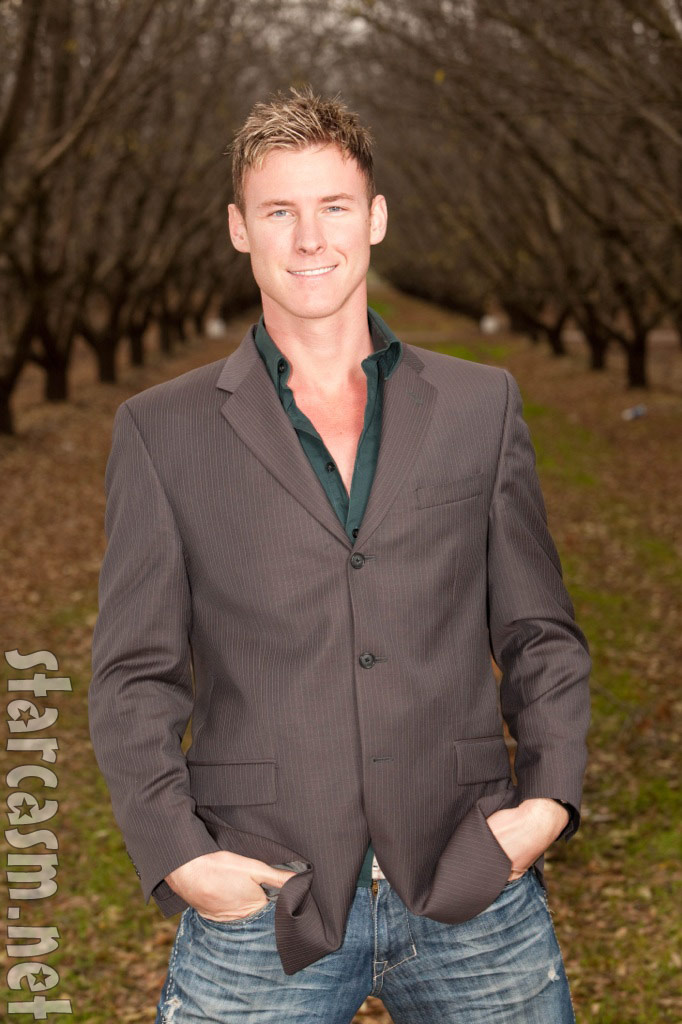 The latest installment of “The Bachelorette Files” features 27-year-old Kasey Kahl of Fresno, California, who will be one of 25 eligible bachelors competing for the heart of Ali Fedotowsky. Keep reading and see if you think Kasey has what it takes to win over Ali! 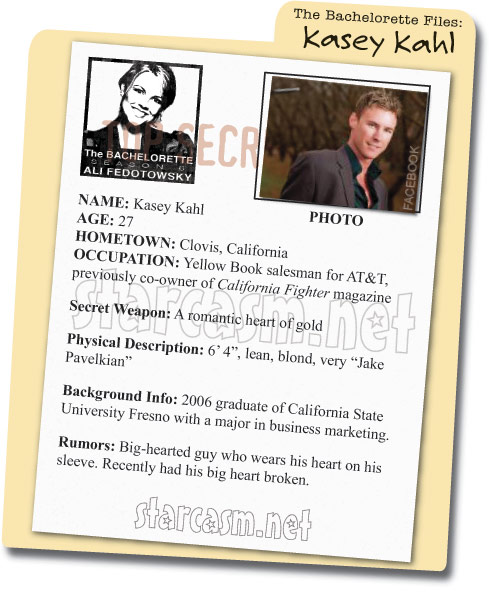 Kasey Kahl is 6′ 4” and was born on November 21, 1982 in California to parents Kerrigan (Kerri) Kahl and Rhonda Kahl (Born Rhonda Kirby, now Rhonda Hill). He has a younger brother Cameron by the same parents. Here is a Facebook photo of the two brothers from waaaay back in the day (Kasey is the one whose face isn’t blurred out – in case there was any confusion) 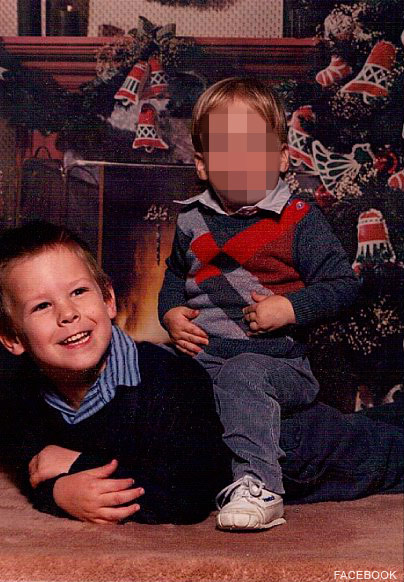 Kasey Kahl attended Clovis High School in Clovis, California from 1997 to 2001 and then California State University in Fresno from 2001 to 2006, where he graduated with a degree in business marketing. It appears as though his work history includes a stint working for his father at KRK Resources, then co-founded the short-lived publication California Fighter magazine, an every-other-month periodical that appears to have published only two, possibly three issues in April and June of 2009.

And here’s the cover to the very first issue – sure to become a collector’s item if Kasey win’s Ali’s heart or goes on to become the next Bachelor! 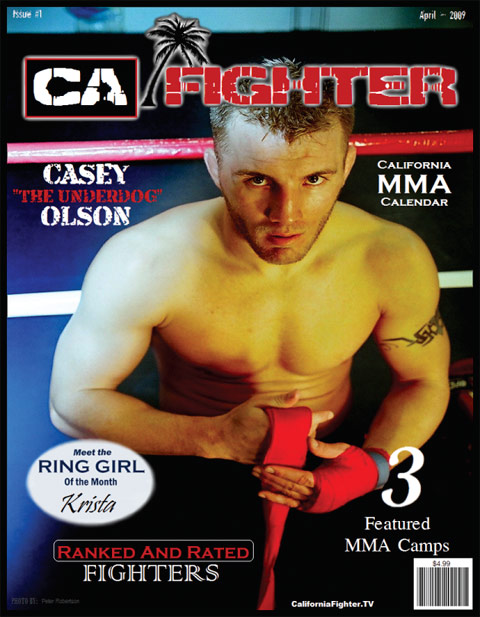 The last known place of employment for Kasey was working in Yellow Book sales for AT&T in Bakersfield, California. That was his job as of September 14, 2009.

Kasey Kahl seemed destined to be a contestant on The Bachelorette, at least it would appear so given a blog entry he wrote on his deleted Myspace account back in 2007. In describing himself he says, “I have always wanted a fairy-tale life. I wanted to be someones knight in shining armour and sweep that special princess off her feet as if it was in a romantic movie or something.” I’ll put in the complete entry, which reads like a cover letter on a Bachelorette resume:

Take Me There…
Current mood:Fantasmic

Sometimes, familiarity and comfort need to be challenged. We get caught up in the serenities of life to where we lose touch with the honesty in ourself. Late at night I have slowly began to realize the friends I have and I cant think of one who I can completely confide in and talk about the things in my life I want to change or even want to entirely accomplish. Don’t get me wrong, its not because I can’ trust them, I have some of the BEST FRIENDS anyone could ever ask for and am so thankful for them. The reason being, is because I feel like no one would understand me or my intentions, or my reasons, or might think I am a flat out idiot. Most of you who know me, know that my mind processes near lightspeed and am always thinking. Everyone has their little secrets and things they conjure up whether its business, relationships, or even malicious intent, lol. I would love the oppurtunity to share that with anyone but it’s just scary to reveal things that might make you look bad or foolish. 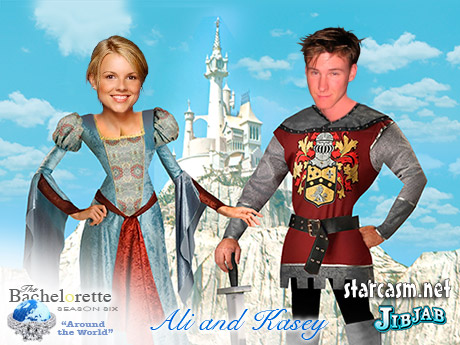 For instance, I have always wanted a fairy-tale life. I wanted to be someones knight in shining armour and sweep that special princess off her feet as if it was in a romantic movie or something. I want that special story that you hear 80 year old couples tell you on a romantic vacation that you almost have to shed a few tears to after hearing it. As pathetic and corny as that sounds, thats just the kind of person I truly am and i dont want to mask it. However I feel like I have to. Dont get me wrong I like my lifestyle but am always on the verge of a breakdown or just stressed out because of what others say. Im sure there will always be someone trying to rain on your parade or try to get the best of you. But I just want to make everyone happy. I want to go back to being the little boy next door who grew up to be the man everyone thought he would be putting a smile on everyones face. I mean I want to go back to being the little computer nerd I used to be. The person who loved to sing just to sing. The person who had nothing to hide and everything to show. Life is just so short and I want to be the best man, the best friend, the best husband, the best father, the best brother,the best at everything I possibly can be. I really am such a dork at heart and am tired of pretending.

This is pretty much a bold statement but I just dont care anymore. I love everyone. even my enemies. I dont want to hold any animosty with anyone. I’m letting everything go in order to not be afraid of who I am and what i have accomplished. Ex’s, Old Friends, New Friends, everyone who knows of my name and has even badmouthed it. I welcome you all. All in hopes of going to that special place in everyones heart and have those wonderful stories to tell when i get old and grey. I encourage everyone to do the same. Be open and honest with everyone and pay it forward.

We have multiplied our possessions, but reduced our values. We talk too much, love too seldom, and hate too often. We’ve learned how to make a living, but not a life. We’ve added years to life, not life to years.

Whoah! For those who feel protective toward Ali that should give you a better idea of Kasey! I spoke to a friend of Kasey’s who assures me he is a big-hearted guy who wears his big heart on his sleeve – sort of a Tenley type. Also like Tenley, Kasey may have recently had his heart broken. It sounds like Kasey will have a lot of supporters among all the romantically-inclined ladies out there!

On a similar note, his younger brother Cameron offered up his show of support with a status update on Facebook: 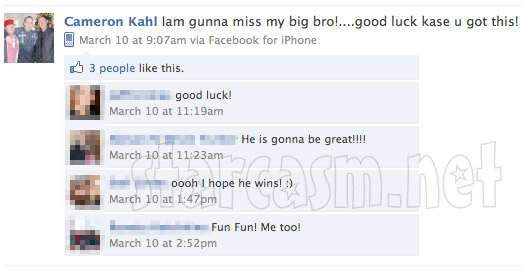 But back to Kasey Kahl the author! Kasey wrote a similarly existential entry to the one above more than a year prior, but this time in prose! (Foreshadowing? Do I sense an Ali love poem being read this season?)

I sometimes find myself drifting through this life without effects,
I often wonder imf I’m truly worth what I have been blessed.

I search through the days that have been hard and try to udnerstand,
The many trials that I have known and the life that I have had.

You see me in my daily grind, so confident and so strong….
Yet when I AM ALONE, I question just where do I belong??? 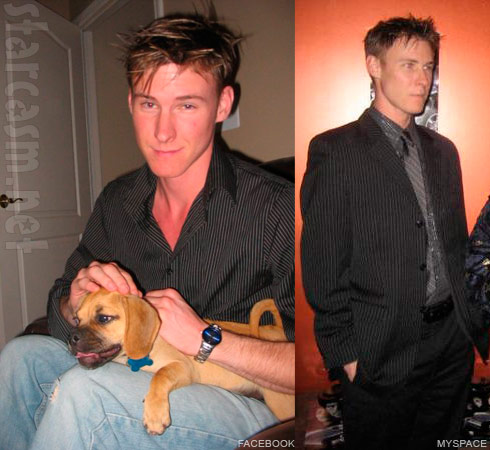 Kasey Kahl as a teenager.

For somewhere deeper, there must be some meaning to this life,
Some way to make a difference and give me a reason for my strife.

Is there some hidden meaning or agenda to be found?
A greater purpose waiting if I care to hang around?

It teases and it taunts me always just slightly out of sight,
A hazy vision out of reach where darkness hides the light.

Perhaps I’m just trying to hard to understand it all,
For can WE EVER truly know what it is we have in store?

Perhaps I make it harder than it has to be sometimes,
But will my searching bring to me my overall meaning in time?

Or will it leave me broken and confused as I feell now,
While Questions bring no solitude, I feel so alone, I need your help somehow…………..

It seems Kasey may have let his successes go to his head a little bit, at least it would appear so according to his friend’s comments on the “Fairy Tale” post from 2007. A few examples of comments left on the blog entry:

“Kasey… I met u at a hooka bar back in the day before u were rolling in “The Dough”. I’m not going to lie, u’ve changed a bunch, but every once in awhile i see that old kasey come out and it gives me a little hope. Not saying who u are is bad, in buisness u have an image to keep, but i remember the kasey before he could whip out a roll of cash. Funny enough, no more than 2 months later u were on ur way to where u are now. And that old kasey got stashed away.”

“kasey, first off let me start off by telling you that throughout this past year and what not you have changed so much that i was kind of scared for you. i must say bro that i have known you since we went to high school together. and that was in the late 90’s and early 00’s i knew you when you were starting out when you worked at food joints and when you worked at other offices. since the time we started hanging out and since i met you i have always known a guy with good intentions behind everything he does. i must say bro that i am truly happy that you are coming to realize who you are.”

“i’m glad you found a way to take your fake away, if you know what i mean
remember who your friends are
your friends arent always the ones you bash with on a regular basis
your friends are the one’s that are still down to drop what they’re doing for you in seconds”

I hope for Ali’s sake that Kasey has been able to keep his “fake away!”

Any Kasey friends out there want to offer up some support with funny stories? We’re a “fair and balanced” celebrity blog, so we also have to welcome ex-girlfriends and former business partners’ not-so-funny stories too.

I think Kasey could do really well – cashing in on his “big sweetheartedness!” Do I hear Mr. Fedotowsky? Could Kasey be the next Bachelor? They seem to like bringing the nice guys back. Should be a fun season! The Bachelorette Season 6 “Around the World” kicks off on May 24 on ABC. Until then, make sure you keep up on your studies by reading through all of the “The Bachelorette Files!”