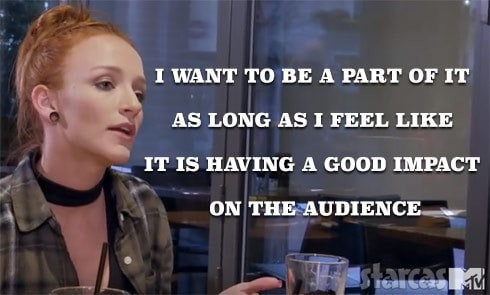 Three of the venerable stars of Teen Mom OG have opened up about why they’re still motivated to appear on the show after all these years.

Catelynn Lowell, Farrah Abraham, and Maci Bookout each had their own take on why they’re still in. Here’s what they had to say to IBT:

“Personally, I say as long as the show is educating people and still helping people and staying real and honestly, Tyler and I always said we would continue to do it. As soon as it starts going to be scripted or nobody’s just interested, then end it. But every day I get a message on social media about how I’ve helped somebody or inspired somebody to do something… that’s the only reason why we do it.”

“There’s not really a time frame. I want to be a part of it as long as I feel like it is having a good impact on the audience and my family and things like that… Even if the show went away tomorrow people are still going to know who we are so it’s not like we would be normal again. At least not for a lot of years. Even then, I would say people would still recognize us. Bentley handles it fine. People don’t really talk to him about it at school or anything like that… Where we live like people know us so well just as a community… We don’t carry ourselves like we’re on a TV show and people really don’t think of us that way.”

“I definitely enjoy the experience and I think Teen Mom has just been a running top show for Viacom, MTV, this network and if it is doing its job then it needs do stay… I definitely feel, and I think I’ve always felt this, I just wanted to make sure I had something set up [for Sophia]. I think I’ve taken that more serious because of her father passing away and just setting her up for success.”

It looks like Catelynn is altruistic about her involvement, Farrah is about getting paid and providing financial security for Sophia, and Maci is cool with letting it play out as long as she feels it’s a good thing in general.