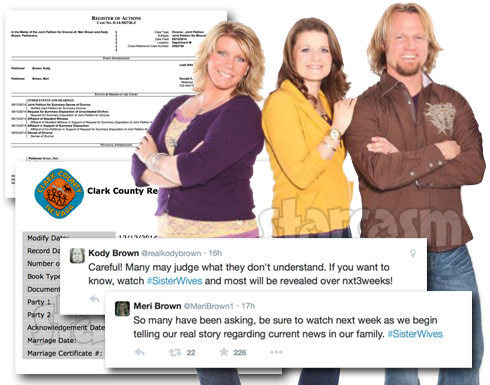 The Brown family of TLC’s hit polygamist reality series Sister Wives made headlines last week when it was revealed that family patriarch Kody Brown had legally divorced his first wife Meri in September, 2014 and then, in December, he legally married his fourth wife, Robyn. “We have chosen to legally restructure our family,” the family later confirmed in a statement.

There has been much speculation over what the motivation might have been for the Brown family to “legally restructure,” with most believing it had to do with the fact that Robyn has three children from a previous marriage and being legally married to Kody would help with any sort of issues such as custody, insurance, taxes, etc. Otherwise, fans have essentially been left in the dark without any further word on the matter coming from the Brown family.

However, it appears as though the divorce and marriage will be addressed on the show next week! TLC is currently doing two-hour blocks of original Sister Wives programming every Sunday night now, with the first hour being a new episode and the second being an hour-long behind-the-scenes look at the show with a focus on a particular wife. Last night’s behind-the-scenes feature focused on Robyn — her introduction to the family, the birth of her son Solomon, her and Kody’s wedding, etc. Next week’s second hour of behind-the-scenes footage will focus on Meri Brown, and it appears as though the divorce and remarriage will be addressed in one, if not both of the new episodes.

The cast members of the show were live tweeting last night’s back-to-back episodes, and that is where it was revealed (or at least strongly hinted at) that fans will get to see the real reason Kody divorced Meri and married Robyn over the course of the next three weeks.

“So many have been asking,” Meri tweeted, “be sure to watch next week as we begin telling our real story regarding current news in our family.”

Kody iterated Meri’s message. “Careful!” he tweeted. “Many may judge what they don’t understand. If you want to know, watch #SisterWives and most will be revealed over nxt3weeks!”

One fan asked Meri, “what are the chances next week’s show will be ‘the real story?'” Meri’s response was, “Very high. Keep watching.”

Another fan tweeted, “If they have a show on living a polygamous life and omit a truth that has a direct impact on it, That’s dishonest.” Meri responded to that comment by writing, “Truths are not omitted. Be sure to watch the next few weeks to get the real story.”

@debbdotblonde Don't be disgusted by what you don't understand. Give it a few more weeks. For me.

Although Robyn didn’t seem to address the divorce and remarriage controversy specifically, she did remind her Twitter followers that regardless of who is the one wife legally tied to Kody, they are all married to him:

You expose how see our family & marriages when you refer to us as not married just committed. We are ALL married to Kody! #BlockingSpree

So be sure to tune in to TLC next week for new episodes of Sister Wives starting at 9/8c to find out the real reason Kody divorce Meri and married Robyn!