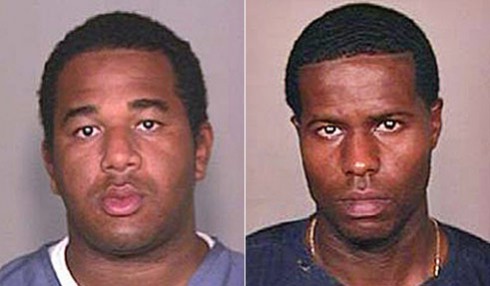 The State of Florida needs our help as they have went and mistakenly freed two convicted murderers from prison and have since realized that they went and pulled a “Florida.”

Joseph Jenkins and Charles Walker, both 34, are considered “escapees” by authorities. So lets learn how these two criminal masterminds pulled off their Shawshank Redemption escape Florida style…

“However, both of their releases were based on fraudulent modifications that had been made to court orders,” Crews said. Oh okay — wait, whah again!?!

Walker was mistakenly freed on October 8 while Jenkins unintentionally got out on September 27. Law enforcement only learned of the situation on Tuesday. The forged orders are believed to have originated in Orange County, Florida.

Capt. Angelo Nieves of the Orange County Sheriff’s Office said, “Where are they? What are the circumstances? What’s going through their minds regarding that walk off? Currently, we believe these people to be dangerous. They’re out. We want to let them know that they should turn themselves in.”

While the hunt is on for Walker and Jenkins, there’s also an investigation underway as to how a mistake this extreme could have happened in the first place.

Worst Bridezilla of all time sends epic email to bridesmaids