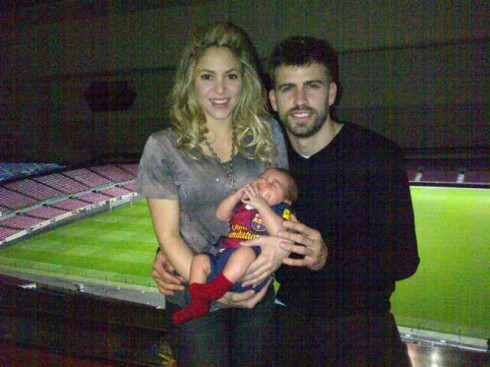 Shakira welcomed her first child, son Milan Pique Mebarak, in January. Since then, she has been every bit of the doting mother — she even took little Milan to the set of The Voice. In a new interview, Shakira revealed that one of her favorite things about being a mommy is breastfeeding.

“Breastfeeding has been one of the best experiences of my life,” Shakira told Us Weekly. “I love it! I can’t stop! I think I’m going to breastfeed him until he goes to college! I’m hooked!”

Not only is breastfeeding an amazing mother/baby bonding experience, it also helps mommies lose weight quicker which is something Shakira has witnessed firsthand. “I think that it helps a lot,” Shakira stated, adding that while she’s definitely slimmed down, she’s not quite at her goal weight. “I haven’t weighed myself … I think I’m close but I can’t sing victory yet!”

Of her new mommy role, Shakira says she’s much different than she thought that she would be with son Milan. Instead of being “super-controlling” as she sometimes can be with her music, she’s much more chill. “I’m so relaxed,” she gushed. “It’s so surprising because everybody thought I was going to be one of those hysterical mothers, like smothering mothers, and I feel that I’m not as nervous. I’m relaxed.”

Next up for Shakira? She’s working on a brand new album. “I’ve recorded some stuff, but I’m halfway there,” she said. “I don’t know exactly what I’ve got because I make so many songs and some of them might make it and some of them won’t. I’m just searching and writing about pretty much anything that comes to my mind and just letting myself be, without putting too much limits.”