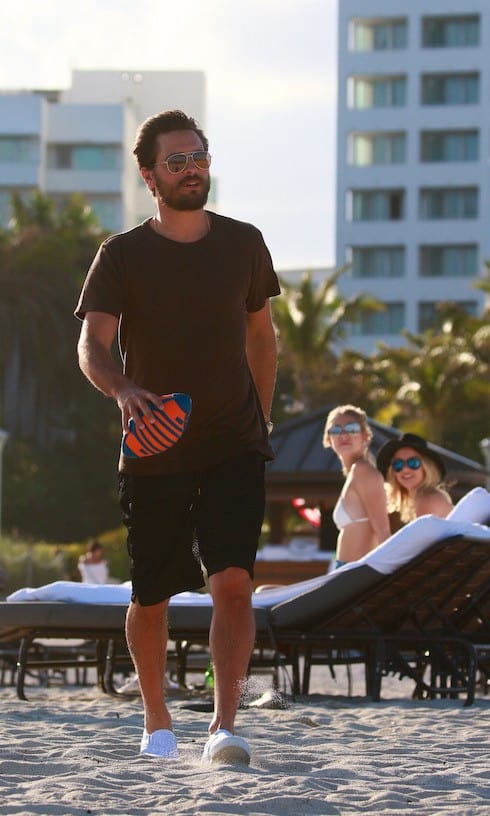 Scott Disick apparently believed all he had to do to get back in Kourtney Kardashian’s good graces was take a very public stroll around Calabasas with his penis swinging behind a flimsy pair of sweatpants and also be worth some vaguely large amount of money. It’s not exactly John Cusack standing outside your window holding a boombox aloft, but for a little while it was enough for Kourtney.

Then, Scott decided he would take advantage of that goodwill by sneaking another woman with him to Costa Rica during what was supposed to be a Kardashian family vacation (and in doing so rendered Tyga the best-behaved Kardashian male on the trip. Think about that for a minute). Scott got the boot and headed up to Miami to act like this was no big deal, and has been putting on another public display of dick-swinging ever since! According to TMZ, he booked himself the Grand Suite at Miami’s Setai Hotel, which goes for $12,500 per night. The three-bedroom suite meant that Scott had plenty of space for “partying with his many lady friends” and “ordering plenty of room service,” which apparently is code for bottle after bottle of Don Julio 1942.

Perez Hilton further elaborated upon the women Scott’s been flaunting. Model J Lynne was the lucky lady he chose to stand behind while Kourtney and Kris Jenner tried to take his head off in Costa Rica; in addition to her, he snagged and flaunted model Amber Davis while playing with a Nerf football on the beach. (Amber is the hatted woman in the photo at the top of the article.) Here’s a closer look at the two women:

And, according to the Daily Mail, there were other “mystery” ladies involved as well. So: Scott Disick still plans to have a lot to explain to his kids in twenty years, and Kourtney appears to be dealing with things fairly well: