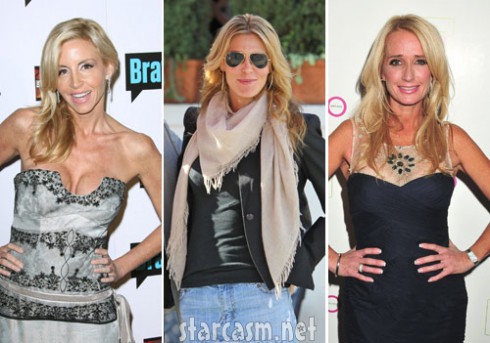 E has posted some serious insider info on Bravo’s popular reality show The Real Housewives of Beverly Hills.  As we wait to see what happens with our seriously high-end-Hills ladies there’s been much conjecture and rumor about who is in and who will be out for season 2.  A recent rumor involving Heidi Montag joining the show turned into a brief war of words between Heidi, Spencer Pratt and Andy Cohen.  Many have assumed that Camille would be leaving due to her highly publicized divorce from Kelsey.

All of this innuendo is fine and dandy and allows us all to cope with out RHOBH addiction but its time to start getting some concrete information.  E is a highly credible source and this latest casting call report appears to have the most traction.  Here is what their insider had to say about the current state of affairs in Beverly Hills.

Camille Grammer: According to E’s source the engine that makes this show run will be around for a 2nd season!  Here is what was said:

“Camille is coming back; she just wants the public to feel sorry for her a little longer because of the whole Kelsey Grammer thing, so she’s not announcing it yet.”

I’d love to see a free and unleashed Camille fresh off the heels of a divorce doing her thing.  I hope this is accurate, the show wouldn’t be the same or as entertaining without her.

Kim Richards: As for Kim R it looks like one year may have been enough:

“It’s 99 percent certain that she won’t do season two.  There is so much more going on than what was shown on TV.  There was a lot of tension building up over the years, they have a complicated relationship.”

If you caught the reunion show you know that Kim refused to address what many of her friends and cast mates view as a potentially serious drinking problem.

“It’s a problem. She just won’t show up to events or functions she is supposed to be at, and no one can get a hold of her,” spills our insider. “It’s really affecting her relationships to those closest to her.  Kim, Kathy Hilton and Kyle all love each other, but their dynamic is complicated.”

Brandi Glanville: The woman who had her man (Eddie Cibrian) stolen by LeAnn Rimes and who is now buddying up with Lisa Vanderpump exile Cedric Martinez is very close to taking Kim’s spot.  This Martinez by-line would create an automatic source of drama so it would seem like a logical way for Bravo to go.

Well there’s the latest who’s in and who’s out insider info for The Real Housewives of Beverly Hills.  We’ll keep you posted when this probably gets blown up by other sources (fingers crossed for the return of Hurricane Camille).