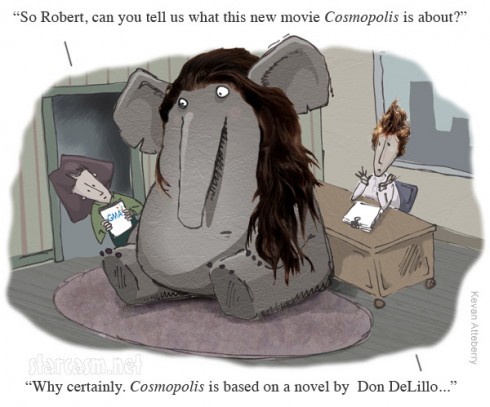 Originally scheduled to promote his new film Cosmopolis, Robert Pattinson is scheduled to appear on The Daily Show with Jon Stewart on August 12 followed by Good Morning America on August 15, his first interviews since news broke of his girlfriend, and Twilight co-star, Kristen Stewart’s alleged affair with Snow White and the Huntsman director Rupert Sanders on July 25. Although there were initial reports stating “everything’s on the table” for the interviews, it now appears that “everything” may just mean everything except anything having to do with Kristen Stewart.

“Robert was booked a long time ago to talk about Cosmopolis, and working with David Cronenberg — he’s doesn’t talk about his personal life,” an insider tells Gossip Cop. The site goes on to point out that even before the news about Kristen Stewart and Rupert Sanders made headlines, Pattinson rarely allowed questions about his personal life. “TV shows were informed that (per his history) he only does interviews to discuss his projects, not his intimate personal relationships,” the site points out.

It should be interesting to see what GMA does with this MONSTROUS elephant in the room. (Anyone remember what happened when they asked Chris Brown about Rihanna?) I just don’t see how they could completely skirt the issue. (I’m sure there is a great “Water for Elephats joke here somewhere)

Perhaps they will arrange some delicate way to avoid it with Robert ahead of time like “Your personal life has made a lot of headlines over the last couple weeks, is that soemthing you are wiling to talk about?” At which point he could simply respond, “No. I don;t like to talk about my private life. I’m here to talk about my new movie, Cosmopolis, which I am really excited about.”

Jon Stewart may do like Banksy and avoid the elephant in the room by painting it in humorously bright colors and then obviously (and funnily) avoiding it altogether, with a few little barbed references thrown into his Cosmopolis questions. (Unless, of course, Robert Pattinson is a Republican — in which case Stewart won’t be cutting him any slack or avoiding any questions!)

Angelina Jolie allegedly had sex with her mother’s boyfriend