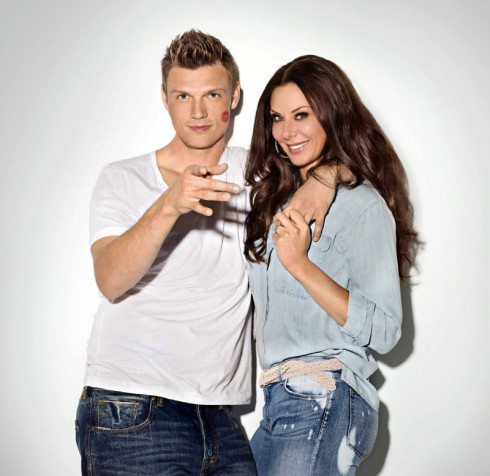 Unlike her famous husband, 31-year-old Lauren isn’t really involved in the entertainment industry — aside from the new reality show. A veterinary technician specialist, Lauren moved to Japan and later Paris in her early 20s to help train others. Upon landing back in the States in her mid 20s, she experienced a bit of a quarter-life crisis .

“I was trying to find my way and figure out what I wanted to do,” Lauren told Half-Full Magazine.

Around the same time, she was introduced to Nick through his sister Angel Carter. Even though Lauren was unimpressed with Nick at first, a relationship eventually blossomed. As it grew more serious, Lauren recalled on the first episode of the show (which is already available online) that she had to make a decision between continuing her career and giving the romance a chance.

“Nick is on tour. He’s gone 300 days out of the year and, in order to have a relationship and make it work, I had to quit my job and be with him,” said Lauren, now 31. “Now, all of a sudden, I’m a dependent on this man to take care of me and provide for me.”

After realizing that situation wasn’t good either, Lauren started working as a fitness specialist and posting her own “Kitt Fit” videos.

Nick and Lauren got engaged in February 2013 and married in April of this year — with VH1 camera crews in attendance. The I Heart Nick Carter show actually picks up before the nuptials as they plan details and contend with some last-minute drama.

“Right before the wedding some horrific family issues came up,” Lauren told OK!. “We talked about whether or not we wanted to air these scenes… We decided that if the entire show is based on true reality we couldn’t sugarcoat anything.”

I Heart Nick Carter premieres on VH1 tonight at 10/9c.