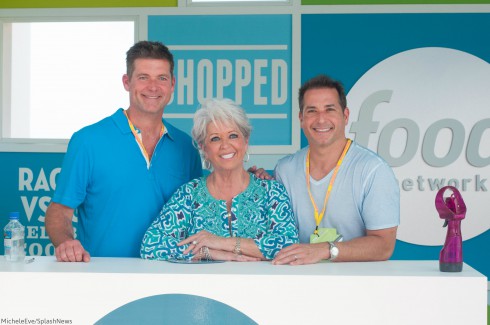 Eight months after The Food Network opted not to renew Paula Deen’s contract in the wake of her N-word scandal, the channel is apparently reconsidering.

Riding Food Network’s Robert Irvine like a horse, Fox News reports Paula announced to the crowd at the South Beach Wine and Food Festival she’s “back in the saddle.” Although the message was playful, it appears well thought out: Robert Irvine was fired from the network in 2008 when sources revealed he lied about his work history. He was later welcomed back to the channel.

Reflecting on that experience, Robert advised Paula, “This is a warning to you. You’ve apologized. You’ve eaten crow. You’re done. Don’t do it anymore. I’ve been there.”

Paula seemed to be on the same page. During her earlier cooking demonstration, she said the past few months have been difficult on her and her family — but she’s truly apologetic. Fox News reports people in the crowd shouted back “You don’t need to apologize!” and “We want you back, Paula!”

The Southern cook responded to the supportive crowd: “Y’all’s cards and letters that I got helped me get out of bed every day… I am not a quitter.”

Paula’s return to The Food Network will likely be mutually beneficial: Business Week reported The Food Network’s ratings slumped after Paula was fired. Beyond the vote of confidence from the channel, Paula earned a lucrative investment earlier this month from Najafi Cos.

With serious financial backing, Paula Deen readies for a rally