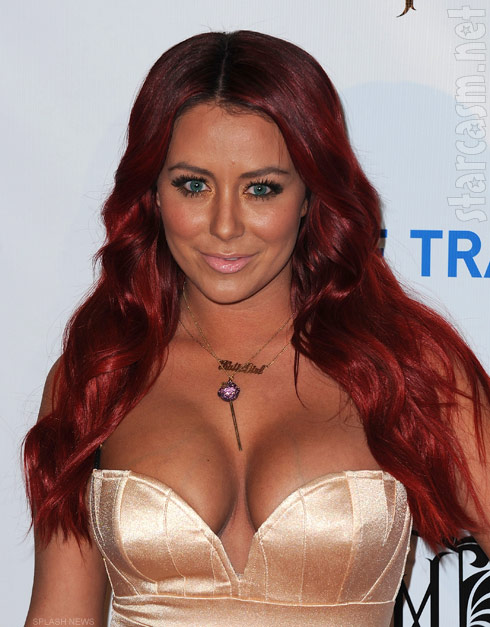 Singer Aubrey O’Day transformed herself into Auburn O’Dayum! at the TRANS4M i.am.angel Grammy event last night as she showed off her red hair and just about every inch of her buxomness in an almost not up to the task mini-dress.

I don’t know much about fashitecture, but something tells me there is a seriously adhesive substance working overtime somewhere under that outfit! 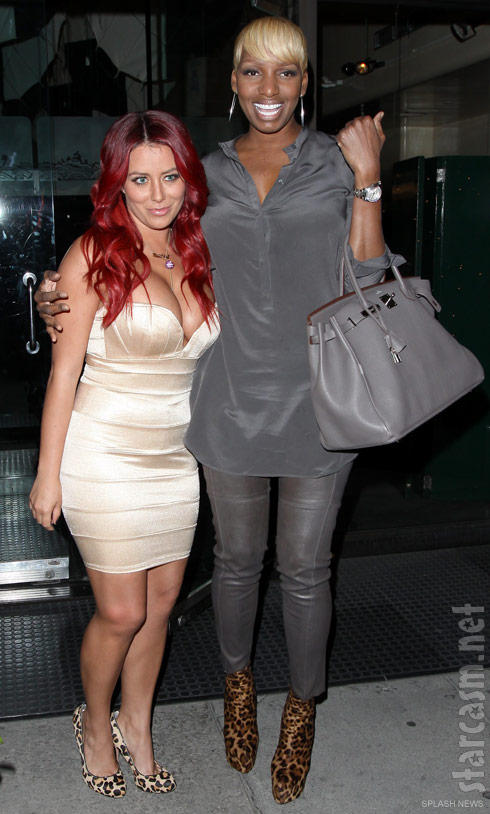 Apparently red hair and big boobs don’t help too much with height! (I forget sometimes that the Real Housewives of Atlanta star is a towering lady!) And just in case you were wondering, leopard print footwear is apparently in.

Aubrey O’Day is reportedly working on a new album due out sometime this year. She talked with Billboard last April after releasing the single “Automatic:”

“‘Automatic’ is the right fit for where music is headed now,” O’Day explains. “It’s a pop-dance track, but I wanted to go in the club and write a song about not having to put on all the glamour and the glitz. So many dance songs are about putting on Louis Vuitton, getting dressed up and everything, and I wanted to do a song about walking in the room and getting automatically noticed and stealing everyone’s attention without trying to.”

“Automatic” is one of “at least 50” songs that O’Day has been working on for her solo debut album for SRC/Universal Motown, a process that’s been chronicled on her Oxygen network reality series All About Aubrey. Future episodes will feature O’Day recording a duet with fellow Danity Kane alumnus Aundrea Fimbres, while the April 11 season finale will find O’Day “reaching out to Diddy,” who guided the group through its formation on MTV’s Making the Band 3.

While we wait for the album, here is a looooong last look at the red-headed Aubrey O’Day, who’s looks plenty tall without NeNe Leakes around!

UPDATE – Here’s a video clip of Aubrey O’Day at the event: