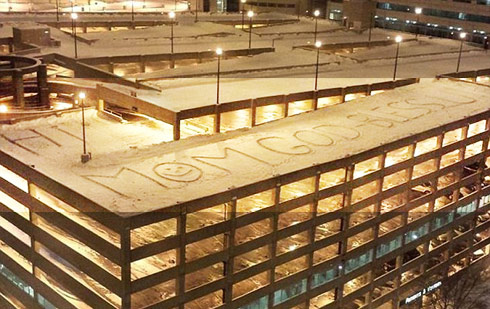 When 14-year-old Will Hart got out of the car with his dad at the parking garage of the Rush University Medical Center in Chicago to visit his ill mom, an idea popped in his head to do something special for her. His spontaneous actions and the simple message he conveyed in the snow not only touched the heart of his mom, Sharon Hart, but that of the entire hospital and now the millions who have already seen his work via social media, news outlets and sites like ours.

Last week Sharon was hospitalized after being diagnosed with Acute Myeloid Leukemia. She has since been receiving chemotherapy treatments in an attempt to battle the disease.

On Sunday her son Will called her excitedly on the phone requesting that she come to the window and look out. When she did, she saw the simple message that her son had etched into the snow. It read, “HI MOM,” with a smiley face featured in the center of the “O” in mom. Sharon told WGN, “It keeps me uplifted in a way that nothing else really could.”

Will said of his idea, “I just kind of thought, ‘You know, it would be great to have my mom see this message. And so I started from there, and my dad was like, ‘What are you doing?’ And he joined in. I said, ‘I’m saying hi to mom,’ and we went on from there.” 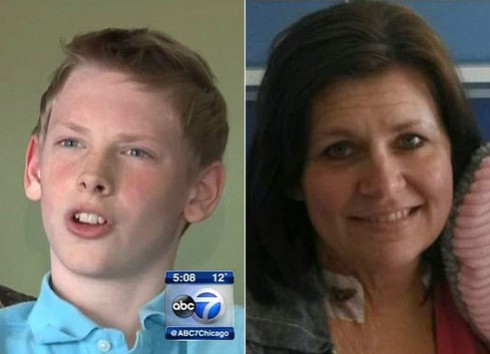 Will Hart and his mother Sharon

When they left that evening at around 10 his father Gary had the idea to continue the message with “God Bless You All” in hopes that it might cheer up others going through their own struggles at the facility. They ran out of room – so the finished script read, “HI MOM, GOD BLESS U”

After its completion a photo was taken of the message by nurse Angela Washek and shared via Facebook by the hospital. At the time they did not know who had written it – or the story behind it. Washek said,  “No matter how cold it gets there is always a message of warmth if we just open our eyes to see it.”

The image has since gone viral. Hospital spokesperson Deb Song told ABC, “It brought so many smiles to our doctors and nurses – and patients as well.” Mary Hoyt, a nurse at the hospital added, “One of the other family members here said they had goose bumps and that night went to bed crying about how special that was.”

Washek has been blown away by the impact of her pic, “I can’t believe how far the picture I took has gone. .. It started by emailing it to my unit director and the CEO. Now the message has been seen nation wide and it’s amazing.”

Will said, “I just want other people to get happy and move on with their lives and for my mother to get well and be happy.”