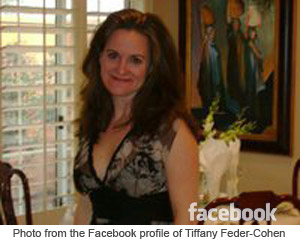 Lindsay Lohan was sentenced to 90 days in jail yesterday for violating the terms of her parole stemming from a DUI arrest in 2007, but the perpetual train wreck isn’t going down without a fight!

In addition to calling Judge Marsha Revel a “f***ing b*tch” and telling friends, “I’m not going to jail!” Lindsay has changed attorneys! TMZ is reporting that her former attorney, Shawn Chapman Holley, has resigned as LiLo’s legal rep and the site speculates that it might be because of Lindsay’s determination to appeal the decision by Judge Revel.

The site also reports that Lindsay Lohan has hired attorney Tiffany Feder-Cohen as her new lawyer. There’s not a lot of information about Tiffany Feder-Cohen online, aside from a Facebook account, a little-used Twitter account and a couple other oddball postings that include a planned honeymoon trip from September 24, 2007 to October 22, 2007, travelling to Tel Aviv, Nice, Paris, Amsterdam, Venice.

UPDATE – A little more information about how Tiffany Feder-Cohen’s name surfaced from PEOPLE:

“We got a call yesterday from a female identifying herself as Tiffany Feder-Cohen,” says L.A. Sheriff’s spokesman Steve Whitmore. “She introduced herself as Lindsay Lohan’s new attorney. I can’t get into details about why she called, but the bottom line is that we at the sheriff’s department only do what the courts instruct us to do.”

The young, attractive (based on her Facebook profile photo above) legal eagle just recently passed the Bar Exam in November of 2009 and should bring a bit of youthful energy to the Lohan camp. Normally Feder-Cohen’s inexperience might be a huge red flag, but we are just talking about a probation violation case here!

I’m sure we will be finding out more about and seeing more of Tiffany Feder-Cohen in the next few days. (My secret hope is that she and Lindsay are old party buddies and we will soon see embarrassing party photos of the two of them passed out and pantyless in Samantha Ronson’s front yard.) Until then, head over to Facebook and become a fan of the Law Offices of Tiffany Feder-Cohen to keep up to date on the latest Lindsay Lohan legal news!