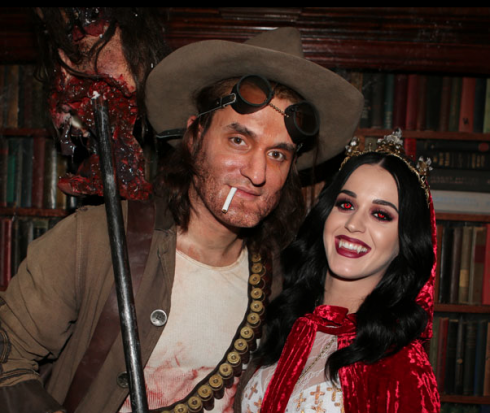 John Mayer and Katy Perry are back on, it looks like, or at least they’re back on to posing together for publicity.

Friday night, while Adele was giving birth, 27-year-old Katy Perry celebrated her own birth a little early (her real B-Day is Thursday) with a Halloween-themed birthday bash. It might have been a shared birthday kind of thing, because John turned 35 last week.

Katy was a vampire, complete with creepy red contact lenses, which go well with her jet black hair. John was a dirty zombie hunter, and apparently a prosthetic nose and chin is required for this look.

The pair partied at The Magic Castle in L.A. with a bunch of friends including a Rob-Patless Kristen Stewart.

The other friends, in case you were wondering, were: