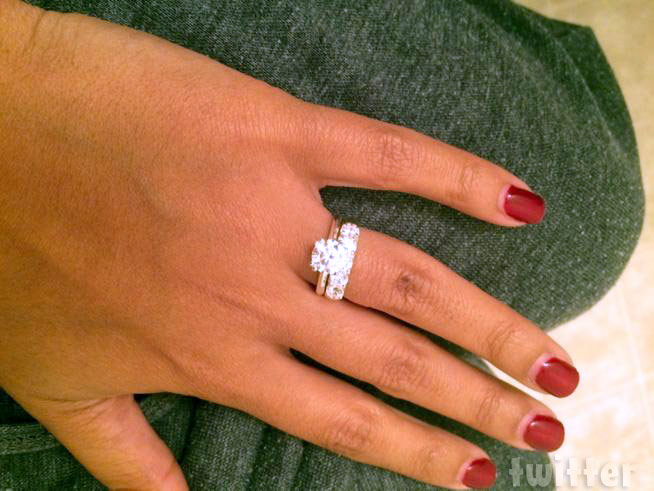 The Teen Momiverse is all up in arms courtesy of a little Twitter trolling by Teen Mom 3 star Briana DeJesus, who tweeted the photo above of what looks to be a rocktacular engagement ring and wedding band pair on her ring finger along with the simple tweet, “Love my man” along with a triple heart emoji.

Although there does appear to be a wedding band included in the photo (and in the second photo from the next morning below), as many commenters pointed out, once married the wedding band is usually worn on the inside of the engagement ring, closer to the heart. That being said, who knows, right? 🙂

The photo above was followed by a series of tweets seemingly confirming her engagement while at the same time referencing her beau (fiance?) Shoc’s ex and mother of his kid(s), who has apparently been on a bit of a jealous rampage against Briana, even hinting that Briana is pregnant:

Still happy whatever briana wants, briana gets since day 1

And Shoc was more than willing to get a little emotional sharing his feeling about Briana on instagram yesterday:

After sharing the first ring photo, Briana’s Teen Mom 3 bestie Katie Yeager offered up her response, which was hilarious as usual:

@BrianaDejesus_ I love hate you so much right now….

“@Katiebyeager: @BrianaDejesus_ your ring. I'm going to burn your house down it's so perfect”omg I know thank you lmao

Well, although nothing has been confirmed, I’d like to say congratulations to Briana! Let’s hope Shoc is man enough to be a great dad to Nova and to withstand the scrutiny of all those DeJesus women! 🙂

Is Nicki Minaj engaged to Meek Mill? Check out her unique 15-carat ring!