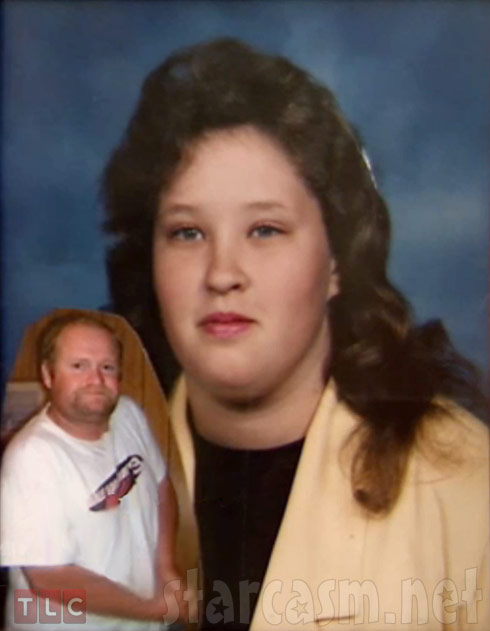 Here Comes Honey Boo Boo matriarch Mama June Shannon is quickly becoming a huge celebrity thanks to her uncouth carefree attitude and quotes like this: “Granted, I ain’t the most beautimous out the box, but a little paint on this barn, shine it back to its original condition. Cause it shines up like it’s brand new.”

And just in case you were wondering what that barn looked like when it was a little closer to brand new (you know, with a little less vajingle jangle) check out the above photo of a young June Shannon framed up with a cutout of current barn owner, Sugar Bear!

The photo is framed and hanging on the wall of June’s mother’s house in Griffin, Georgia where June’s oldest daughter Anna (17) filmed her baby shower.

She later shed a little light on Anna (a.k.a. Chickadee)’s situation, which is not an uncommon situation for teen moms. “Anna’s baby’s daddy ain’t in the picture. You think that boy’s gonna love and care about you? Negative. All that boy is wantin’ is to get in your biscuit and get a little piece, and he’s runnin’.”

Wow. I don’t know how many Teen Mom and 16 and Pregnant Reunion Specials I’ve watched in which Dr. Drew was armed with textbooks full of stats and reports as he tried to convey some of the realities facing teenage mothers, but he never explained it as clearly as Mama June!